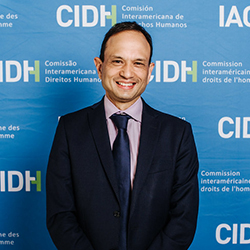 Commissioner Carlos Bernal Pulido was elected by the General Assembly of the OAS during its Regular Period of Sessions, on November 12, 2021, for a period of four-year term, from January 1, 2022 through December 31, 2025. He is a professor at the Faculty of Law at the University of Dayton, Ohio, United States, and at the Universidad de la Sabana, Colombia. He was a Justice of the Constitutional Court of Colombia (2017-2020). He is a lawyer from the Externado de Colombia University, Colombia (1996), and holds a Ph.D. in Law from the University of Salamanca, Spain (2001), and Master's (2008) and Ph.D. (2011) in Philosophy from the University of Florida, United States. He has been a professor at the Universidad Externado in Colombia, the Macquarie University in Australia; and the University of Florida in the United States. He has also been visiting professor at the law schools of the Sorbonne University in Paris, Paris Nanterre University, and Universidad de León in Spain; and visiting researcher at the law schools of Yale University, King's College London, and the Max Planck Institute for Comparative Public Law and International Law in Germany. He is the author of books, magazine articles, and chapters on topics related to the protection of human and fundamental rights, democratic constitutionalism, constitutional creation and change, the ontology of law, and the theoretical foundations of civil liability and Condition. His work has been published by the most prestigious publishing houses and indexed magazines in Spanish, English, French, German, Italian, Portuguese, and Russian. According to Google Scholar, he is one of the most-cited authors in the world in the fields of constitutional theory, theory of law, philosophy of law, comparative law, and constitutional law.

Commissioner Edgar Stuardo Ralón Orellana was elected by the General Assembly of the OAS during its 49th Regular Period of Sessions, on June 28, 2019, for a four-year term from January 1, 2020 through December 31, 2023. He is a constitutional lawyer for Guatemala. He has been professionally active for 20 years and, as a legal expert, has specialized in constitutional law. He has combined university teaching and litigation and is an authority on constitutional matters in his native country. The defense of safeguards for individual rights like the right to life, civil liberties, and political rights stands out in his human rights career. He is a citizen of Guatemala.