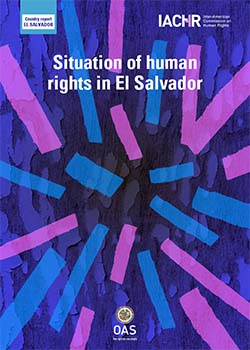 Washington, D.C. — The Inter-American Commission on Human Rights (IACHR) presented a new report, "The Human Rights Situation in El Salvador", which is based on vast quantities of information that were received and systematized before, during, and after the on-site visit that the IACHR conducted between December 2 and 4, 2019, some 32 years after its previous on-site visit to the country.

In this report, which was initially scheduled for 2020 but was rescheduled for 2021 due to the pandemic, the IACHR presented a comprehensive diagnosis of the situation up to December 31, 2020. This included recommendations to the State based on its international human rights obligations and in accordance with inter-American standards, which seek to contribute to its actions to protect and guarantee human rights. One specific aim is to preserve the historical achievements that the Salvadoran population have made since the internal conflict, while strengthening the country's democratic and human rights institutions.

The document points out the structural nature of many of the human rights problems affecting the country, noting that several of them have continued to exist since the internal armed conflict. With regard to citizen security, the IACHR acknowledged the efforts made since the change of government in June 2019, in particular, the drastic reduction of the homicide rate to the lowest ever levels since the Peace Accords were signed in 1992. It also emphasized the importance of taking steps to rebuild the social fabric as part of the Territorial Control Plan established by the current government. The IACHR underlined the importance of incorporating mechanisms for social participation and raising awareness around citizen security policies.

Thirty years after the signing of the Peace Accords, the IACHR considers it fundamental that the State guarantee the right to truth, justice, and comprehensive reparation for the victims of the armed conflict. Likewise, it calls on the State to step up the fight against impunity for the crimes committed during that period, also by guaranteeing access to archives containing relevant information for the investigation into the facts. In the same vein, it urged the State to make every effort to search for missing people and recommended that a regulatory framework for the national search policy be developed and implemented. It also urged the State to ratify the Inter-American Convention on the Forced Disappearance of Persons, the International Convention for the Protection of All Persons from Enforced Disappearance, and the Convention on the Non-Applicability of Statutory Limitations to War Crimes and Crimes against Humanity.

On the matter of women's rights, the IACHR noted with great concern that despite the legislative progress that the country has made, El Salvador continues to be the country with the highest number of murders of women in Latin America and the Caribbean. In light of this, the State must strengthen the system of protection for women and girls who are victims of violence, including by creating a Special Fund for the Reparation of Victims of Femicide. Another point of concern is the fact that regulations criminalizing abortion under any circumstances remain in force in the country, which is jeopardizing women's right to live free from violence and discrimination, as well as their rights to life, personal integrity, and health. The IACHR once again voiced its concern regarding information on women who are being deprived of their freedom and sentenced to up to 30 years in prison for crimes relating to obstetric emergencies. It thus recommended that El Salvador's regulatory framework be adapted to comply with inter-American standards on the sexual and reproductive rights of women and girls.

In addition, the IACHR recommended that the country adopt a comprehensive plan to ensure that lesbian, gay, bisexual, trans, gender-diverse, and intersex persons can live free from violence and discrimination. The recognition of the rights of LGBTI persons is fundamental to achieving equality, dignity, and non-discrimination, and to combating the violence to which they are subjected.

The visit verified the deplorable conditions of detention and high levels of overcrowding experienced by people being deprived of their freedom. In response, the IACHR recommended that the State provide prisons with human and financial resources and establish a criminal policy that uses deprivation of freedom as a measure of last resort, with alternative measures and minimum guarantees for all people who are deprived of their freedom, while also implementing social reintegration programs at general and maximum security penitentiaries.

Furthermore, as a result of extraordinary security measures, people who are deprived of their freedom are not allowed any contact with the outside world, which is particularly worrying in the context of the COVID-19 pandemic. The report thus recommended ensuring that prisoners can receive regular visits. With specific regard to maximum-security prisons, the IACHR is concerned that solitary confinement is being used in a way that runs counter to international standards on the deprivation of freedom. As a consequence, the IACHR called once more on the State to strike a balance between the security measures it imposes and the budgetary deficiencies observed at detention centers to ensure that it can provide the human resources, medical services, infrastructure, and guards needed to comply with inter-American standards on this issue.

Poverty, violence, and inequalities are recognized as being both causes and consequences of the impairment of the economic, social, cultural, and environmental rights of the victims of forced internal displacement. On this point, the IACHR also recommended that the State implement comprehensive measures that place rights at the center of prevention strategies, particularly the rights to housing, work, education, and healthcare.

The report also documents hostility and acts of intimidation toward journalists and human rights defenders by government actors, such as complaints by organizations and the media about restrictions on public access to information. The IACHR and the Office of the Special Rapporteur for Freedom of Expression recommend that the State adopt the necessary measures to guarantee a safe working environment for human rights defenders and journalists and the right of access to public information.

The IACHR hopes that this report will contribute to guaranteeing the full enjoyment of human rights in El Salvador. To this end, it called on the State to continue its efforts to comply with the recommendations it put forward in the report and to maintain an open, respectful dialogue with international human rights organizations and society as a whole. It also noted once more that it is at the State's disposal to draw on its role and mandate to provide technical support and continue the dialogue between the parties.