IACHR presents the report: "Right to Self-Determination of Indigenous and Tribal Peoples" 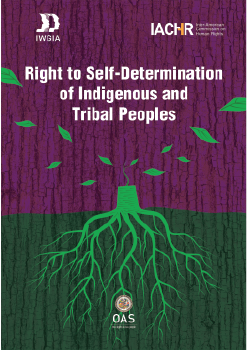 Washington, D.C. - The Inter-American Commission on Human Rights (IACHR) presents its thematic report "Right to Self-Determination of Indigenous and Tribal Peoples" in which it recognizes the current demands of indigenous and tribal peoples, analyzes international standards, and makes recommendations to States with the aim of contributing to efforts to recognize and implement the right to self-determination. This report is part of the strategic plan of the Rapporteurship on the Rights of Indigenous Peoples, which seeks to make visible practices, experiences, and challenges that these peoples face in the recognition and exercise of this right.

The report highlights that indigenous and tribal peoples of the Americas have the fundamental right to self-determination, which encompasses the right to freely determine their political status and freely pursue their economic, social, and cultural development. From the historical and cultural perspectives of these peoples, self-determination is a right that pre-exists the creation of the current American States. Therefore, it is a fundamental right for the effective enjoyment of other rights.

The report also analyzes the standards and jurisprudence of the Inter-American Human Rights System in relation to the various constituent elements of self-determination, the recognition of this right in the domestic legal systems of various States, and the practices and experiences of these peoples in the exercise of self-determination as well as the obstacles they face in exercising it. In addition, the report addresses the reparative nature of this right, and the understanding of the right from a cross-cutting, gender, intergenerational solidarity, and intercultural approach.

Among the recommendations made to States, it is worth highlighting the adoption of measures to guarantee the right of indigenous and tribal peoples to exercise self-determination in a practical and effective manner, within the framework of their own procedures, institutions, and worldviews. In addition, the Commission recommends promoting spaces for intercultural dialogue and coordination between authorities of these peoples and States regarding issues such as coordination between indigenous and tribal justice systems and the identification of measures to mitigate the impacts of climate change and to prevent and address harms related to the COVID-19 pandemic.

The IACHR thanks the International Working Group for Indigenous Affairs (IWGIA) for providing technical, logistical, and financial support for the preparation of this report. The CIDH also extends thanks to the Due Process Foundation (DPLF); First Peoples Worldwide of the University of Colorado Boulder; the Center for Research and Studies in Social Anthropology of Mexico (CIESA-Southeast Headquarters); and the editors of the book Autonomías y Autogobierno en la América Diversa for their support.

Finally, the IACHR recognizes the high level of interest and engagement of representatives of indigenous and tribal peoples of the continent in the regional workshops and in the responses sent to the questionnaire for the report. With that in mind, the IACHR thanks them for sharing their testimonies, stories, views, and proposals concerning the self-determination of their peoples. The IACHR also appreciates the contributions made by the States, academic institutions, non-governmental organizations, professionals, and other sectors of civil society in the region that sent responses to the questionnaire.

A principal and autonomous body of the Organization of American States (OAS), the IACHR dervies its mandate from the OAS Charter and the American Convention on Human Rights. The Inter-American Commission has a mandate to promote the observance and defense of human rights in the region and acts as a consultative body to the OAS in this area. The Comission is composed of seven independent members who are elected in an individual capacity by the OAS General Assembly and who do not represent their countries of origin or residence.