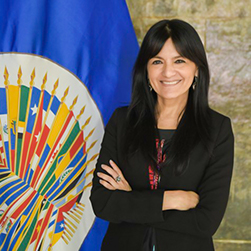 Commissioner Julissa Mantilla Falcón
Rapporteur on the Rights of Women

Tracy Robinson was IACHR Commissioner from January 2012 to December 2015. The Commission designated her as Rapporteur on the Rights of Women on January 27, 2012, until the end of her mandate as Commissioner. In her capacity as Rapporteur, she conducted visits to Suriname and Colombia  to analyze the situation of the rights of women in that country, and she examined particularly the situation of women during the in loco visits to Dominican Republic, Honduras and Mexico. She also made presentations, participated in seminars and conducted joint activities with UN organs. Tracy Robinson is a lawyer and teaches Gender and the Law, Constitutional Law and Commonwealth Caribbean Human Rights, among other law subjects, at the University of the West Indies, Jamaica.

The Rapporteur on the Rights of Women is Commissioner Luz Patricia Mejía, who assumed the post on March 4, 2008. A citizen of Venezuela, she was elected by the OAS General Assembly in 2007 and began her term with the IACHR in January 2008. She was First Vice-Chair of the IACHR in 2008 and Chair in 2009. She is a member of the Working Group for the analysis of national reports established in the Protocol of San Salvador, appointed by the IACHR. Commissioner Mejía is an attorney who graduated from the School of Juridical and Political Sciences at the Central University of Venezuela, where she studied administrative law. She was Director of Legal Counsel in Venezuela’s Public Ministry and previously worked in that country’s Public Defender’s Office, as Director of Legal Resources and later Director General of Legal Services. She was also in charge of carrying out the Defense Program as part of Venezuela’s Education-Action in Human Rights Program (PROVEA), and worked as an attorney with the Women’s Association for Reciprocal Assistance (AMBAR) and the Organization for Citizen Action against AIDS (ACCSI). She co-authored the Law for the Protection of Victims, Witnesses, and Others Involved in Judicial Procedures, as well as the Organic Law of the Public Defender’s Office and the Organic Law of Citizen Power. She has published research and specialized articles, and has lectured in courses and seminars. Commissioner Mejía served as Chair of the IACHR in 2009.

Víctor Abramovich, a citizen of Argentina, was a Commissioner of the IACHR from January 2006 to December 2009. He served as Second Vice-Chair in 2007 and First Vice-Chair in 2009. He was the IACHR Rapporteur on the Rights of Women from March 1, 2006, to March 4, 2008. In that capacity, he conducted a visit to Chile in September 2007 to gather information for the preparation of the Report on the Rights of Women in Chile: Equality in the Family, Labor and Political Spheres. He also oversaw the preparation of the reports entitled The Right of Women in Haiti to be Free from Violence and Discrimination, published in 2009, and Violence and Discrimination against Women in the Armed Conflict in Colombia, published in 2006. Upon assuming the post of Rapporteur, he also continued the research begun by his predecessor, Susana Villarán, completing the report Access to Justice for Women Victims of Violence in the Americas, which was published in 2007. Abramovich was also Rapporteur on the Rights of Indigenous Peoples from March 4, 2008, to December 31, 2009, and in that capacity he was a member of the IACHR delegation that carried out a visit to Bolivia in June 2008 to gather information for the report entitled Captive Communities: Situation of the Guaraní Indigenous People and Contemporary Forms of Slavery in the Bolivian Chaco. As First Vice-Chair of the IACHR, he participated in the onsite visit the Commission made to Honduras in August 2009 to observe the human rights situation in the context of the coup d'état of June 28, 2009, a visit that resulted in the publication of the report Honduras: Human Rights and the Coup d'État. He was the IACHR delegate for the OAS Working Group to Examine the Periodic Reports of the States Parties to the Protocol of San Salvador in the Area of Economic, Social and Cultural Rights. He oversaw the writing of the Commission’s Guidelines for Preparation of Progress Indicators in the Area of Economic, Social and Cultural Rights and Access to Justice as a Guarantee of Economic, Social, and Cultural Rights. A Review of the Standards Adopted by the Inter-American System of Human Rights. He also supervised the preparation of Principal Guidelines for a Comprehensive Reparations Policy and headed the IACHR delegation that conducted a field visit in connection with the provisional measures ordered for the members of the communities that constitute the Community Council of Jiguamiandó and the families of Curbaradó, in Chocó, Colombia (available only in spanish). Abramovich earned his law degree from the Faculty of Law and Social Sciences of the University of Buenos Aires (UBA), and he holds a master’s degree in international law from American University's Washington College of Law, in Washington, D.C. He has also completed numerous specialized courses in human rights in England and Spain. He has been Executive Director of Argentina’s Center for Legal and Social Studies (CELS), a legal consultant to the Ombudsman’s Office of the city of Buenos Aires, and a consultant to the Inter-American Institute of Human Rights (IIHR), among other positions. He is currently a Professor of Human Rights at the Faculty of Law of UBA and of the National University of Lanus, as well as a Visiting Professor at American University and at Ecuador’s “Simón Bolívar” Andean University, among others. Commissioner Abramovich is the author of several specialized publications, in particular on economic, social, and cultural rights.

Susana Villarán, a Peruvian citizen, was a Commissioner of the IACHR from January 2002 to December 2005. She served as Second Vice-Chair of the IACHR in 2005 and First Vice-Chair in 2004. She was the IACHR Rapporteur on the Rights of Children and Rapporteur on the Rights of Women. She participated in the onsite visit the IACHR carried out to Venezuela in May 2002, and conducted various visits as Rapporteur to countries, such as to Guatemala in July 2002 and September 2004, and to Colombia at various times between 2003 and 2005. As a Commissioner, she also carried out visits to Nicaragua, Brazil, Paraguay, Argentina, Jamaica, Costa Rica, Honduras, and Mexico, among other countries. During her time on the Commission, the report on the onsite visit to Guatemala was published: Justice and Social Inclusion: Challenges to Democracy in Guatemala (available only in Spanish). Other specialized reports were also done, such as the Report on the Demobilization Process in Colombia, published in 2004, and Violence and Discrimination against Women in the Armed Conflict in Colombia, published in 2006. Susana Villarán conducted research and consultation processes for the preparation of the report Access to Justice for Women Victims of Violence in the Americas. She has been a member of the United Nations Committee on the Rights of the Child, and she has served as Minister of Women and Human Development; as her country’s first Police Ombudsman; and as Executive Secretary of Peru’s National Human Rights Coordination Office (Coordinadora Nacional de Derechos Humanos). On October 3, 2010, she was elected Mayor of Lima, the first woman to be elected for this office since the foundation of the city, in 1532.

A Chilean citizen and expert in international law, human rights, and inter-American affairs, Claudio Grossman is Dean of the Washington College of Law at American University and the Raymond Geraldson Scholar for International and Humanitarian Law. He was a Commissioner of the IACHR from January 1994 to December 2001, and served two terms as Chair (1996 and 2001). He also served as the IACHR Rapporteur on the Rights of Indigenous Peoples, and he was the Commission’s first Rapporteur on the Rights of Women, elected during the 85th period of sessions of the IACHR (available only is spanish), held in February 2004. In that capacity, he was responsible for researching and drafting a report on discrimination against women, in fact and in law, in the Americas. That study included meetings of experts, consultations to the States, and other activities, which are detailed in Progress Reports published in 1995, 1996, and 1998. On October 13, 1998, the Commission approved the Report of the IACHR on the Status of Women in the Americas, which was carried out under Grossman's direction. In his capacity as IACHR Commissioner, Grossman participated in visits to Argentina, Brazil, Canada, Colombia, Dominican Republic, Guatemala, Haiti, Mexico, Panama, Paraguay, Peru, and Venezuela, among others. He has also participated in numerous field visits and electoral observation missions in Latin America, Eastern Europe, and the Middle East. He served as the Commission’s delegate in numerous cases before the Inter-American Court of Human Rights. In April 2010, Grossman was unanimously reelected Chairperson of the United Nations Committee against Torture, a position he has held since April 2008; he has been a member of the Committee since 2003. Claudio Grossman obtained his law degree from the University of Chile and his doctorate in law from the University of Amsterdam, Holland. He speaks Spanish, English, French, and Dutch, is the author of numerous books and articles on international law and human rights, and belongs to many associations, including the Inter-American Institute of Human Rights, of which he is a board member. He has received numerous distinctions for his work in human rights and international law, including the Henry W. Edgerton Civil Liberties Award from the American Civil Liberties Union of the National Capital Area, in recognition of exceptional lifetime achievements related to the advancement and defense of human rights and civil liberties.