Decisions regarding the US Detention Center in Guantanamo

The IACHR has used all its mechanisms to address the human rights situation of the persons detained by the United States in its Naval Base in Guantanamo, Cuba:

Requests of Permission to Conduct a Visit

On July 25, 2017, the IACHR decided to request that precautionary measures be adopted for Mohammad Rahim, in the United States. The request for precautionary measures alleges that Mohammad Rahim, who is currently deprived of liberty in the Guantanamo Bay Naval Base after having been held in a secret detention center where he was subjected to torture, did not receive adequate medical treatment and was confined in isolation in enclosed spaces for extended periods of time. After analyzing the allegations of fact and law, the IACHR believes that the information presented demonstrates, prima facie, that the beneficiary is in an urgent and serious situation as a result of is current health and the conditions of his detention. Consequently, pursuant to Article 25 of the Rules of Procedure of the IACHR, the Commission asked the United States to adopt the measures necessary to protect the life and personal integrity of Mohammad Rahim; to guarantee that the conditions of his detention meet applicable international standards, to guarantee access to adequate medical treatment, to coordinate the measures to be adopted with the beneficiary and his representatives; and to report on the actions taken toward investigating the alleged facts leading to the adoption of this precautionary measure and prevent their repetition.

On July 7, 2015, the IACHR decided to request that precautionary measures be adopted for Mr. Al-Hawsawi, in the United States of America. The request of precautionary measures alleges that the proposed beneficiary, a 46-year old from Saudi Arabia, has allegedly been deprived of his liberty for 12 years, and since 2006 has allegedly been detained at the U.S Naval Station at Guantánamo Bay, Cuba. Since his abduction from Rawalpindi, Pakistan, the applicants sustain that the proposed beneficiary has suffered from threats and acts of violence against his life, health and personal integrity as a victim of the U.S Central Intelligence Agency’s (CIA) Rendition, Detention and Interrogation Program. The applicants reported that the proposed beneficiary was detained by the U.S. authorities in Pakistan for his alleged involvement in the attacks of September 11, 2001 on U.S. soil. Applicants indicated that the U.S. government has acknowledged that the proposed beneficiary was a "victim of the Torture Program", and detained at undisclosed locations until about September 2006, when at the time he was allegedly transferred "to a secret prison at Guantanamo Bay". After analyzing the factual and legal arguments set forth by the parties, the Commission considers that the information presented shows, prima facie, that Mr. Al-Hawsawi faces a serious and urgent situation, as his life and personal integrity are presumably at risk due to the alleged conditions of detention. Consequently, in accordance with Article 25 of its Rules of Procedure, the Commission asked the United States to adopt the necessary measures to protect the life and personal integrity of Mr. Al-Hawsawi; to adopt the necessary measures to guarantee that the detention conditions are adequate in accordance with applicable international standards; to adopt the necessary measures to ensure access to medical care and treatment and to inform regarding the actions taken to investigate the alleged incidents that gave rise to the adoption of this precautionary measure, so as to avoid a recurrence.

On March 31, 2015, the Commission decided to request the adoption of precautionary measures in favor of Moath al-Alwi, in United States. The request for precautionary measures alleges that the beneficiary is allegedly at risk due to the alleged detention conditions in the U.S. Naval Station at Guantánamo Bay, Cuba. After analyzing the allegations of fact and law, the Commission believes that the information presented shows, prima facie, that Moath al-Alwi is in a serious and urgent situation, as his life and physical integrity are said to be at risk. Consequently, in accordance with Article 25 of its Rules of Procedures, the Commission requested the United States to adopt the necessary measures to protect the life and personal integrity of Moath al-Alwi; adopt the necessary measures to guarantee that the detention conditions are adequate in accordance with applicable international standards; adopt the necessary measures to ensure access to medical care and treatment; and report on the actions taken to investigate the presumed facts that led to the adoption of this precautionary measure in order to avoid the repetition of the alleged circumstances.

( EXTENSION )
PM 259-02 - Detainees in the US Military Base in Guantanamo, United States

On July 23, 2013, the Inter-American Commission on Human Rights extended, on its own initiative, the scope of the precautionary measures in favor of the detainees held by the United States at the Naval Station in Guantanamo Bay, in order to require the closure of that detention facility. The extension was based on the failure of the United States to comply with the precautionary measures already in force in favor of the detainees since 2002, the persistence of situations of prolonged and indefinite detention, and allegations of widespread abuse and mistreatment, including unnecessary and humiliating searches, the force feeding of detainees who have chose to participate in a hunger strike, and the increasing segregation and isolation of detainees. In addition, the information received by the Commission indicates the response of the authorities to the hunger strike has included forced feeding, unnecessary and humiliating searches, and the increased isolation of the detainees. Given these reports, the Commission requested specific information from the US Government on April 19, 2013, and reiterated that request on June 11, 2013. The Commission notes the Government's submission of July 11, 2013, but observes that it fails to provide detailed information in response to the specific questions posed. The Commission calls the Government's attention to the international standards that require respect for personal autonomy and dignity. Taking into account the human rights obligations of the United States as a Member State of the OAS, and given the ongoing risk of irreparable harm to the rights of detainees that is aggravated with the passage of time, the Inter-American Commission has decided to extend the scope of these precautionary measures and require the Government of the United States to proceed to immediately close the detention facilities at the Naval Station at Guantanamo Bay; to transfer the detainees to home or third countries in observance of human rights guarantees, principally the obligation of non-refoulement; to release those who have already been cleared for transfer should be expedited; and to house in appropriate conditions and accord applicable due process rights to any detainees subject to trial.

On August 20, 2008, the IACHR granted the request for precautionary measures for Mr. Djamel Ameziane. The request for precautionary measures alleges that Mr. Ameziane was detained by United States agents in Kandahar, Afghanistan in January 2007 and taken to the United States Naval Base at Guantánamo. According to the information received by the Commission, Mr. Ameziane was allegedly tortured and subjected to cruel, inhumane and degrading treatment during his incarceration. The request also alleges that he was in danger of being deported to his native country, Algeria, where he might be subjected to cruel, inhumane and degrading treatment. The Commission asked the United States to immediately take the measures necessary to ensure that Mr. Ameziane is not subject to torture or to cruel, inhumane or degrading treatment while in its custody and to make certain that he is not deported to any country where he might be subjected to torture or other mistreatment. The Commission continues to monitor the situation.

On March 21, 2006, the IACHR granted precautionary measures in favor of Omar Khadr, a Canadian citizen aged 19 who was detained in Guantánamo. The information received during a hearing held during the 124th regular session of the IACHR states that the beneficiary is on trial before a military commission in Guantánamo for a crime allegedly committed in Afghanistan when he was 15 years old, and that during his detention and interrogation by military personnel he was denied medical attention; his feet and hands were handcuffed for long periods of time, and he was kept in a cell with fierce dogs; he was threatened with sexual abuse; and his head was covered with a plastic bag. The petitioners allege that the statements taken from him under these circumstances may be admitted as evidence and used against him. During the hearing, the State indicated that the military court could admit all reasonable evidence without clarifying whether statements obtained by torture or cruel, inhumane, or degrading treatment may be used in the trial. The Commission requested that the State, inter alia, adopt the measures necessary to ensure that the beneficiary is not subjected to torture or cruel, inhumane, or degrading treatment and to protect his right to physical, mental, and moral integrity, including measures to prevent him being kept incommunicado for long periods or subjected to forms of interrogation that infringe international standards of humane treatment. The Commission also requested that the State respect the prohibition on the use of any statement obtained by means of torture or cruel, inhumane, or degrading treatment against the beneficiary, and investigate the events and bring to justice those responsible, including those implicated when the doctrine of “management accountability” is applied.

On October 28, 2005, the Commission decided to extend the scope of MC 259/02. Through this extension, the Commission required the United States to adopt the necessary measures to thoroughly and impartially investigate, and to prosecute and punish all instances of torture and other ill-treatment that could have been perpetrated against detainees at Guantánamo Bay, either through interrogation methods or not. It also asked the United States to ensure that they respect the ban on using any statement obtained under torture in any legal proceeding, with the exception of any proceedings against the person accused of torture. Additionally, the Commission asked the United States to adopt the necessary measures to ensure that any detainee who could face the possibility of torture or other cruel, inhuman and degrading treatment if transferred, removed or expelled from Guantanamo Bay, access adequate, individualized study of their circumstances through a fair and transparent process before a competent, independent and impartial decision body. In case there is substantial basis for believing that the person would be in danger of being subjected to torture or other ill-treatment, the State must ensure that the detainees are not transferred or removed, and that diplomatic assurances are not used to avoid the obligation of non-refoulement of the State

Photos of the hearing held March 12, 2013
To open a photo, click on it
Photo gallery of this hearing on Flickr

Commissioners at the hearing on the Guantanamo detainees’ human rights situation, which took place on March 12, 2013 as part of the 147th Session of the IACHR

Organizations that requested the hearing. From left to right: Kristine Huskey from Physicians for Human Rights, Francisco Quintana from the Center for Justice and International Law (CEJIL). Also in the audience were Omar A. Farah from the Center for Constitutional Rights, and Ramzi Kassem, Immigrant & Non-Citizen Rights Clinic, City University of New York (CUNY) Law School

Chairman of the IACHR, Commissioner José de Jesús Orozco, at the hearing

Commissioner Tracy Robinson, Rapporteur for the United States, at the hearing

Commissioner Rodrigo Escobar Gil, Rapporteur on the Rights of Persons Deprived of Liberty, at the hearing

Photos of the hearing held October 28, 2008
Photo gallery of this hearing
To open a photo, click on it

In the hearing, Commissioner Florentín Meléndez, then Rapporteur on the Rights of Persons Deprived of Liberty 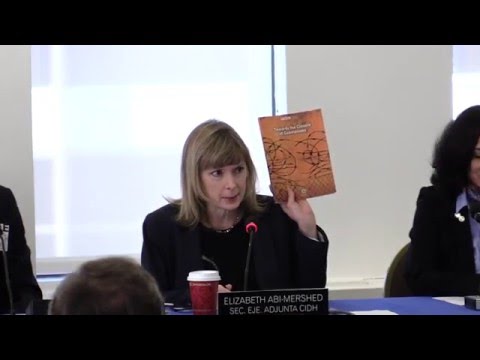 Roundtable: Towards the closure of Guantamano
December 10, 2015