The new report of the Inter-American Commission on Human Rights
calls once again on the United States of America to close the detention center at the
U.S. Naval Base in Guantanamo Bay, Cuba.

This Report examines three main areas of concern within
the framework of core international human rights:

Read the executive summary of the report

In the aftermath of the terrorist attacks of September 11, 2001, the United States decided to open a detention center at the U.S. Naval Base in Guantanamo Bay, Cuba. The United States Government considered that holding detainees outside of its territory would deprive federal courts of jurisdiction over detainees’ claims. Seven years later, the U.S. Supreme Court found this premise unconstitutional.

Read the introduction of the report

Guantanamo is “a facility that should have never been opened [and it] has become a symbol around the world for an America that flouts the rule of law.”

Find out the nationalities of the detainees. Open the map on new tab

The continuing and indefinite detention of individuals without the right to due process in Guantanamo is arbitrary and constitutes a clear violation of international law.

Reasons of public security cannot serve as a pretext for the indefinite detention of individuals, without any charge whatsoever. When these security measures are extended beyond a reasonable time, they become serious violations of the right to personal liberty.

Read chapter 3A of the report
Next

Force-feeding has been used on prisoners who used hunger strikes as a form of protest. A U.S. judge described force-feeding as a “painful, humiliating, and degrading process.” Adnan Farhan Abdul Latif, who described the forced feeding as “having a dagger shoved down your throat”, committed suicide in Guantanamo in 2012.

The fact that a State is confronted with terrorism should not lead to restrictions on the protection of the physical integrity of the person.

Read chapter 3B of the report
Next

The United States has the international legal obligation to afford all persons detained under its jurisdiction a proper judicial proceeding to challenge the legality of their detention.

The essential objective is to safeguard persons from the arbitrary exercise of power by the State. Therefore, the non-existence of effective domestic remedies places persons detained at Guantanamo in a defenseless position, and jeopardizes the rule of law in a democratic society.

Read chapter 4A1 of the report
Next

When the military commissions at Guantanamo exercise jurisdiction over a matter that federal courts should and could hear, there is a violation of the rights to due process and to be tried by a competent, independent and impartial tribunal, previously established by law.

Read chapter 4A2 of the report
Next

The attorney-client privilege is not respected at Guantanamo Bay. Prison authorities have access to private legal mail, certain topics are prohibited in conversations between defense counsel and their clients, and military defense counsel is not allowed to have telephone conversations with their clients. These and other restrictions clearly constitute a violation of the right to an adequate defense.

Read chapter 4A3 of the report
Next

The United States has created a separate detention regime, exclusively designed to hold and try foreign Muslim men, which appears to target individuals on the basis of their nationality, ethnicity and religion 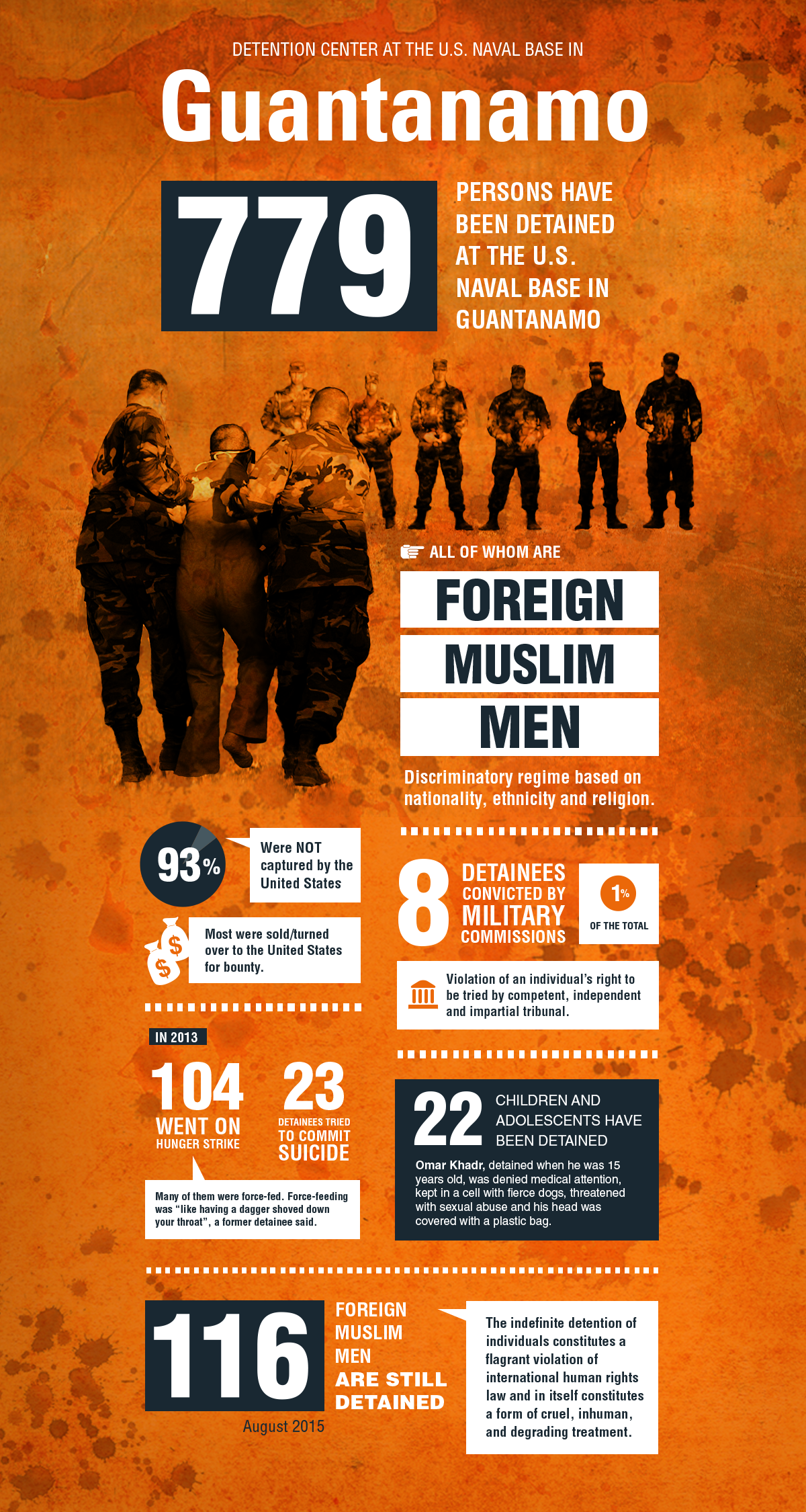 The Commission has used all its tools and mechanisms in order to protect the rights of the detainees at Guantanamo, including:

The United States of America must implement the rights established in the American Declaration of the Rights and Duties of Man.

The IACHR calls once again on the United States to close Guantanamo and to do so in a responsible manner. In order to do this, the U.S. must: