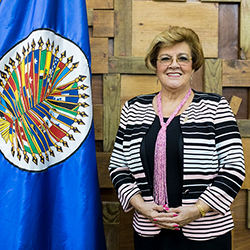 The Rapporteur on the Rights of the Child is Esmeralda Arosemena de Troitiño. She was re-elected by the General Assembly of the OAS during its 49th Regular Period of Sessions, on June 28, 2019, for a further four-year term from January 1, 2020 through December 31, 2023. In her first term as a commissioner (2016-2019), she served as President of the IACHR during 2019.

She held office in Panama's judiciary: she was a Justice of the Supreme Court, of which she was vice-president; she also presided the Chamber for Criminal Cases, and was a judge on the High Court on children and adolescent affairs. She participated in the Special Commission that proposed constitutional reforms in Panama on 2011, and on the Commission that elaborated the Code of Constitutional Procedures in 2016. She has a degree in Philosophy, Letters and Education, with a specialization in Pedagogy, as well as a degree in Law and Political Science. Her post-graduate studies are in gender, with a specialization in family and childhood, as well as constitutional affairs. She is an academic and a professor at the University of Panama, the Superior Judicial Institute and Panama's Judicial Authority. She collaborates with the Public Prosecutor's Office School with regards to the new criminal system and in the subject of juvenile criminal justice. She is a consultant on childhood, adolescence, women and family for international organizations. She was also an ad honorem consultant in the elaboration, debates and approval of important legislation on these matters for Panama's legislative authority. She is a citizen of Panama.

Rosa María Ortiz was the Rapporteur on the Rights of the Child. The Commission designated her for this function on January 26, 2012, and her mandate as Rapporteur finished when her term as Commissioner ended, on December 31, 2015. Rosa María Ortiz is a citizen of Paraguay. She was elected at the 41st OAS General Assembly in June 2011 for the standard four-year term, which began on January 1, 2012. She graduated in social communications media and is an expert in children’s human rights. She has been Vice-President of the United Nations Committee on the Rights of the Child and adviser on human rights and cultural diversity for the Paraguayan Presidency’s National Secretariat of Culture. She is founder and member of several human rights organizations, including Decidamos, Global, Tekoha, Callescuela and Workshop on Communication and Popular Education. In 2003 she was recognized with the award Paraguayan Women of the Paraguayan Presidency’s Women’s Secretariat, and in 2010 she received the award Peter Benenson for the Defense of Human Rights from the Paraguay Section of Amnesty International. During Alfredo Stroessner’s dictatorship, she worked through ecumenical organizations in favor of the political prisoners of her country. Commissioner Ortiz has offered numerous conferences, workshops and has written articles on the rights of children.

Paulo Sérgio Pinheiro was Rapporteur on the Rights of the Child from early 2003 until December 31, 2011. In his capacity as Rapporteur on the Rights of the Child, Paulo Sérgio Pinheiro proposed and supervised the elaboration and publication of the Report Juvenile Justice and Human Rights in the Americas (2011). For its elaboration, subregional meetings were organized for the Souther Cone countries (in Paraguay), Central America and the Caribbean (in Costa Rica), the Andean region (in Colombia) and additional meetings in the Caribbean, as well as regional meetings in Montevideo and Washington. In addition, working meetings were conducted to Suriname, Guyana, Trinidad and Tobago, Belize, Jamaica, Saint Lucia and Haiti. Moreover, under the leadership of Commissioner Pinheiro a request was sent to the IA Court HR for an Advisory Opinion on the use of corporal punishment as a method of discipline against children and adolescents as incompatible with the inter-American standards. When the IA Court HR decided not to answer such request, the Rapporteurship worked on the Report on Corproal Punishment and Human Rights of Children and Adolescents (2009). The report affirms that the use of corporal punishment as a way to discipline children and adolescents, whether imposed by state agents or when a State permits or tolerates it, constitutes a form of violence against children that wounds their dignity and hence their human rights. It also contains recommendations to the States to advance in a comprehensive manner in the protection of the human rights of the child. In addition, during his mandate, the second edition of The Rights of the Child in the Inter-American Human  Rights System was published. This document analyzes the current state of the inter-American norms, mechanisms and decisions related to the rights of children. During his term, and with the support of UNICEF, the Rapporteurship launched the preliminary phase of a report on the situation of children and adolescents institutionalized in the Americas. Finally, Paulo Sérgio Pinheiro led the elaboration of a thematic report on the phenomenon of the maras in Central America, and under his leddership a questionnaire was sent to the States and organizations of civil society in El Salvador, Guatemala and Honduras. In his capacity of Rapporteur on the Rights of the Child, Paulo Sérgio Pinheiro conducted visits to Argentina (2008), Colombia (2008), Costa Rica (2009), Chile (2009), Haití (2008), Jamaica (2008) y Uruguay (2008), among other countries. He taught dozens of courses, workshops and seminars and he traveled throughout the region presenting the published reports on the rights of the child. In addition, he promoted the coordination of the work of the IACHR and the UN, effort that was reflected in the realization of joint visits by the IACHR and UNICEF to Guatemala, Honduras and El Salvador in 2004, and to Haiti in 2005. A citizen of Brazil, he was elected in the OAS General Assembly held in June 2003 and began serving on the IACHR on January 1, 2004. He was reelected during the 37th regular period of sessions of the OAS General Assembly in June 2007 for the standard four-year term, which began on January 1, 2008. Paulo Sérgio Pinheiro is Adjunct Professor of International Relations at Brown University's Watson Institute for International Studies. He was United Nations Special Rapporteur for Myanmar and for Burundi, and was appointed by the UN Secretary-General as an independent expert to prepare the Study on Violence against Children, presented in 2006. He also served as Vice-Chair of the Humanitarian International Verification Commission in Bern, Switzerland, and participated in human rights observation missions in Argentina, Chile, Haiti, Peru, Paraguay, Togo, and East Timor, among other countries. He has taught at a number of universities, including the University of São Paulo in Brazil; Oxford in Great Britain; Notre Dame and Columbia in the United States; and the École des Hautes Études en Sciences Sociales in Paris, France. He has published hundreds of essays, articles, and books on human rights.

Susana Villarán, a Peruvian citizen, was a Commissioner of the IACHR from January 2002 to December 2005. She served as Second Vice-Chair of the IACHR in 2005 and First Vice-Chair in 2004. She was the IACHR Rapporteur on the Rights of Children and Rapporteur on the Rights of Women. She participated in the onsite visit the IACHR carried out to Venezuela in May 2002, and conducted various visits as Rapporteur to countries, such as to Guatemala in July 2002 and September 2004, and to Colombia at various times between 2003 and 2005. As a Commissioner, she also carried out visits to Nicaragua, Brazil, Paraguay, Argentina, Jamaica, Costa Rica, Honduras, and Mexico, among other countries. During her time on the Commission, the report on the onsite visit to Guatemala was published: Justice and Social Inclusion: Challenges to Democracy in Guatemala (available only in Spanish). Other specialized reports were also done, such as the Report on the Demobilization Process in Colombia, published in 2004, and Violence and Discrimination against Women in the Armed Conflict in Colombia, published in 2006. Susana Villarán conducted research and consultation processes for the preparation of the report Access to Justice for Women Victims of Violence in the Americas. She has been a member of the United Nations Committee on the Rights of the Child, and she has served as Minister of Women and Human Development; as her country’s first Police Ombudsman; and as Executive Secretary of Peru’s National Human Rights Coordination Office (Coordinadora Nacional de Derechos Humanos). On October 3, 2010, she was elected Mayor of Lima, the first woman to be elected for this office since the foundation of the city, in 1532.