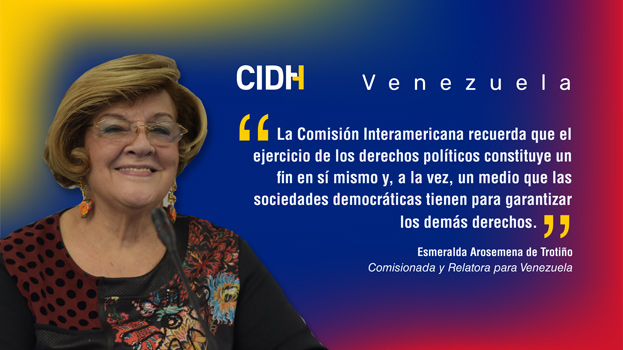 Washington, D.C. – The Inter-American Commission on Human Rights (IACHR) rejects the violations of political rights that took place in Venezuela's 2021 elections and urges the State to make a genuine commitment to democracy and the rule of law.

The European Union's Election Observation Mission denounced that Venezuela's National Election Council had rejected 27 candidates in regional and municipal elections in 2021 due to political disqualifications imposed by the Comptroller General. This decision disproportionately affected political parties who were critical of the government, including the Venezuelan Communist Party, with 15 disqualifications, and opposition parties united in the umbrella organization Democratic Unity Roundtable, with at least three disqualifications.

Along similar lines, the Supreme Court of Justice suspended the vote count in the election for the position of governor of the state of Barinas. The opposition candidate, was leading the count by a large margin, had allegedly been disqualified by the Comptroller General, though he had been able to register as a candidate and though—as he himself told the Commission—he had never been notified of his alleged disqualification. Something similar happened with the opposition's next candidate to the position of governor of Barinas, who was also informed of her disqualification the moment she tried to register as a candidate. For the IACHR, these are arbitrary decisions that seek to violate the political rights of opposition voters.

Since 2015, more than 30 leaders of the opposition to the Venezuelan government have been disqualified by the Comptroller General. These penalties have led the State to be internationally condemned in the López Mendoza case. The IACHR stresses that no administrative institutions may restrict the political rights to elect and be elected, through disqualification or dismissal procedures. According to inter-American standards, consolidating and protecting a democratic order that respects human rights requires that these types of sanctions be based only on a conviction handed by a judge in criminal law proceedings.

The Inter-American Commission stresses that the exercise of political rights is an end in itself, as well as the means by which democratic institutions protect all other rights. The IACHR therefore urges the State to rebuild the separation and independence of powers through specific reforms and to ensure that the Comptroller General will stop imposing these sanctions in future elections.