Four Years On, IACHR Presents an Assessment of the Activities Held by Its Special Monitoring Mechanism for Nicaragua and the Results They Attained 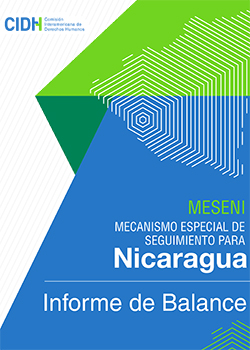 Washington, D.C. – The Inter-American Commission on Human Rights (IACHR) presented a report with an assessment of the activities held by its Special Monitoring Mechanism for Nicaragua (MESENI)—which has been in place for four years—and the results they have attained.

Since the beginning of the protests of April 18, 2018, the IACHR has deployed all its tools—based on the applicable conventions—to respond promptly and in a timely manner to the serious human rights violations that have happened in the context of State repression in Nicaragua. The IACHR arrived in the country on May 17, 2018, for a working visit that lasted five days. This visit enabled on-site observation and led to the Commission's first recommendations.

Subsequently, on June 24 of the same year, the special Follow-up Mechanism for Nicaragua MESENI was installed and operated in the city of Managua, after the invitation of the State and in compliance with the recommendations derived from the preliminary observations and the Final Report of the visit. On December 19, 2018, the State of Nicaragua informed the decision to suspend the presence of the MESENI in the country and the IACHR visits to Nicaragua. As of this date, the Mechanism has continued to monitor the situation in Nicaragua from the IACHR headquarters in Washington D.C. and by conducting working visits to other countries.

Over these four years, the MESENI has conducted working visits to various countries in the region to monitor the development of the Nicaraguan crisis, through periodic meetings with civil society organizations and with victims of human rights violations and their families. This has enabled the documentation of serious violations and their exposure to the international community; the provision of support to Nicaraguans whose rights are being violated or who have been forced to flee their country; and efforts to build civil society capacities and to brace memory for potential transitional justice proceedings in the future.

Over four years, the MESENI has produced 177 press releases on developments in this human rights crisis; four reports held in Chapter IV.B of the Commission's Annual Report, for the years 2018–2021; 31 monthly newsletters; and one multimedia site containing up-to-date records of fatalities in the context of this crisis. The MESENI has also heard 1,986 testimonies, which have enabled it to reflect victim voices in the various thematic and country reports that have been published over this period.

So far, the IACHR has granted 129 precautionary measures to directly protect the lives and integrity of more than 280 people, and it has requested from the Inter-American Court of Human Rights three temporary measures and eight extensions. In the petition and case system, 399 petitions have been filed concerning human rights violations allegedly committed in the context of social protests. Of these, the IACHR has launched proceedings on 58 petitions. Also since 2018, the IACHR has published 10 admissibility reports and taken four cases involving Nicaragua to the Inter-American Court of Human Rights.

Regarding the MESENI's operations, the IACHR has also supported the dissemination of human rights standards about memory, truth, and justice, as well as the use of IACHR mechanisms, through 40 workshops attended by more than 900 people. This work has had an impact on the creation of new organizations and groups who defend human rights and on an increased use of the inter-American system, through requests for precautionary measures or through case applications.

Four years after the MESENI was created, the IACHR stresses its solidarity with victims of the political, social, and human rights crisis that started in April 2018 in Nicaragua. There is a persistent context of widespread impunity concerning the human rights violations committed in State repression of social protests. These human rights violations have left at least 355 people dead, more than 2,000 people injured, and 1,614 people arrested, and they have also led to hundreds of arbitrary dismissals of healthcare professionals and more than 150 unwarranted expulsions of university students, while more than 150,000 people have been forced to flee the country and seek international protection in Costa Rica, according to data issued by the United Nations High Commissioner for Refugees. More than 1,400 civil society organizations have had their legal status revoked.

Finally, the IACHR stresses its commitment to continuing to work to coordinate the efforts of the international community, until the 180 individuals who remain deprived of liberty in conditions that violate human dignity are released and until all the safeguards and liberties associated with a democratic State where the rule of law prevails are restored, ensuring the separation of powers.