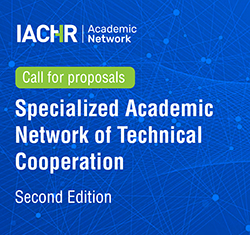 Washington, D.C. - The Inter-American Commission on Human Rights (IACHR) is inviting universities and academic organizations in the Americas that specialize in human rights to apply to take part in the second session of the Specialized Academic Network for Technical Cooperation.

The IACHR decided to issue this invitation as part of its Strategic Plan 2017–2021. The objective of the Specialized Academic Network for Technical Cooperation is to expand linkages and partnerships with academic institutions from all over the Americas and contribute to raising awareness of the standards and principles of the Inter-American System of Human Rights (IASHR), as happened during the network's first session.

Universities and academic centers specializing in human rights may submit proposals relating to the topics and products that the IACHR has identified as being of the highest priority for the second session, which are described in detail in the call for proposals.

The projects to be developed will provide technical support for the work carried out by the offices of the thematic rapporteurs and the special rapporteurs, the Follow-Up of Recommendations Section, and the Promotion, Training, and Technical Cooperation Section at the IACHR Executive Secretariat. In addition, these projects will also contribute to strengthening human rights protection work in the Caribbean.

The call will be open from April 8 through May 8, 2022. See here for more information, including the annexes to the call and the application form.