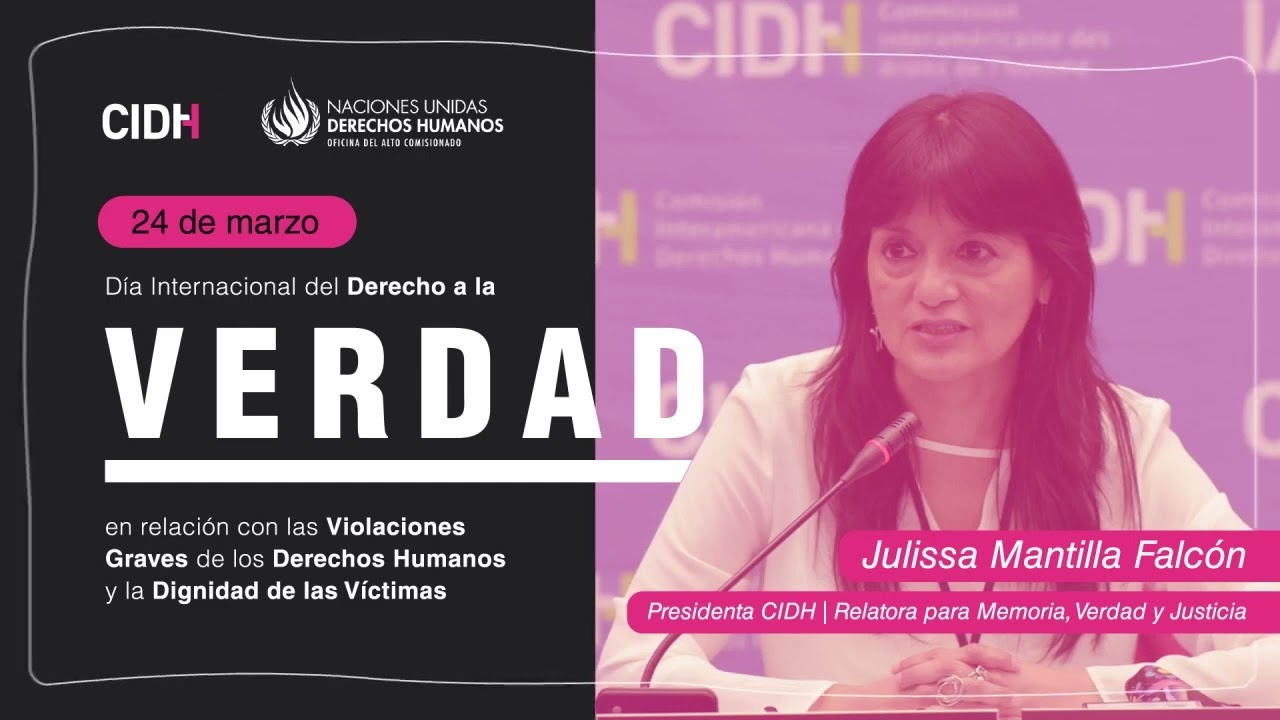 Washington, D.C. - On the International Day for the Right to the Truth Concerning Gross Human Rights Violations and for the Dignity of Victims, the Inter-American Commission on Human Rights (IACHR) and the United Nations' Special Rapporteur on the Promotion of truth, justice, reparation and guarantees of non-recurrence remind States in the Americas of their obligation to commemorate, preserve and publicize the historical truth concerning serious rights violations. The IACHR and the Special Rapporteur call for the development of public policies on memory based on documentary and testimonial evidence and designed with the participation of victims and civil society.

The IACHR and the UN's Special Rapporteur have noted a set of challenges in memorialization processes conducted in various countries in the Americas following internal armed conflicts or dictatorships. There have been reports of remembrance initiatives designed without prior consultation with victims and civil society and of the spread of discourse that revictimizes, denies or relativizes the serious rights violations committed in those contexts or that invalidates efforts to consolidate peace and democracy. The IACHR and the UN's Special Rapporteur are also concerned about rollbacks including censorship of historically valuable documents and cultural initiatives and about the destruction of or difficulty in accessing archives and other evidence that is relevant to establish and preserve the historical truth.

Addressing gender and other intersectional vulnerability factors that were significant in rights violations in the recent past remains a further structural challenge. The IACHR and the UN's Special Rapporteur note that it is crucial to ensure actor diversity and representativeness both in consultation processes involving victims and in staffing decisions concerning institutions to promote public policies on memory. The IACHR and the UN's Special Rapporteur further stress that such policies need to be drafted and implemented with a gender perspective that is critical of hegemonic patriarchal cultures with ties to the violence in question.

In its Principles on Public Policies on Memory in the Americas, the IACHR makes recommendations to guide the design, development and implementation of public policies on memory based on a comprehensive approach from a human rights, gender and intercultural perspective, encompassing vulnerable and historically discriminated populations adversely affected by these serious rights violations. The UN's Special Rapporteur has addressed the normative framework linked to States' obligation to adopt memory processes and to ensure non-regressiveness, as well as the need to implement strong, active and multidimensional public policies on memory, to provide an adequate response to past crimes and to prevent their recurrence.

The IACHR and the UN's Special Rapporteur warn States of their international obligations to retrieve, preserve and publicize the historical truth concerning serious human rights violations. They therefore call on States to protect the memory legacy and to refrain from adopting initiatives or fostering discourse that disregard the voices of victims or revictimize them. The IACHR and the UN's Special Rapporteur further encourage States to ensure that public policies on memory develop gradually and incorporate a gender perspective and an intersectional approach.

The UN's Special Rapporteurs are involved in the Human Rights Council's Special Procedures. The Special Procedures, the highest-level group of independent experts in the UN's human rights system, is a generic way to address the Council's independent investigation and oversight mechanisms, in charge of situations involving specific countries and thematic issues all over the world. Experts in the Special Procedures are volunteers: they are not part of the UN staff and they are not paid for their work. They are independent of all governments and organizations and they provide their services in an individual capacity.