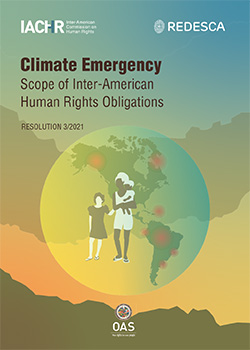 The resolution recognizes that climate change is a human rights emergency, constituting one of the greatest threats to the full enjoyment of human rights by present and future generations, to the health of ecosystems and all species that inhabit the hemisphere. Its adoption responds to the initiative by REDESCA within the scope of the mandate received in the 2017-2021 strategic plan of the IACHR, as well as it is a priority of the issue in the 2021-2023 strategic agenda of the Office of the Special Rapporteur.

According to the president of the IACHR, Julissa Mantilla Falcón said: "The human rights approach with a gender perspective and intersectionality is essential to address climate change and the threat it poses to people in the most vulnerable situations. This resolution is a fundamental tool to implement it effectively".

For her part, the Special Rapporteur, Soledad García Muñoz, said: "Climate change is a tragedy for the rights and health of people, as well as for nature. This resolution shows that complying with state obligations within the framework of the inter-American human rights system requires climate ambition and justice."

In making this resolution public, the IACHR and the SRESCER take note of the recent release of the latest report of the Intergovernmental Panel on Climate Change (IPCC), which highlights that human-caused climate change is causing dangerous and widespread disruption in nature, affecting the lives of billions of people living in highly vulnerable contexts.

The climate emergency has brought with it a significant threat to the enjoyment of several ESCERs essential for a dignified life, such as the right to water and sanitation, food, health, housing, and the right to a healthy environment. Therefore, the resolution aims to systematize the obligations that States have in the field of human rights in the context of the climate crisis, so that the implementation, design, and execution of climate actions has the appropriate rights-based approach.

To prepare the resolution, the Office of the Special Rapporteur led the research and drafting processes, which included the participation of experts, as well as dialogues with civil society organizations, academia, and relevant actors in the field, including within the framework of the Conferences of the Parties (COP) to the United Nations Framework Convention on Climate Change (UNFCCC). In this way, the text contemplates the main issues that have been addressed in the climate negotiations and that affect the obligations of States in terms of human rights.

The text includes a series of standards and recommendations addressed to the member states of the Organizations of American States (OAS), which are also relevant to the work of civil society organizations, academia, national human rights institutions, as well as other multilateral organizations working in the region.

The Commission and the SRESCER invite such actors, such as the social media and journalists, to widely disseminate this resolution. For its part, the SRESCER makes itself especially available to Member States, the OAS, and other inter-American entities, to generate promotional actions and technical assistance in its implementation.

REDESCA is an autonomous Office of the IACHR, specially created to support the Commission in fulfilling its mandate to promote and protect economic, social, cultural, and environmental rights in the Americas.

The IACHR is a principal and autonomous organ of the Organization of American States (OAS), whose mandate arises from the OAS Charter and the American Convention on Human Rights. The Inter-American Commission has the mandate to promote the observance and defense of human rights in the region and acts as an advisory body to the OAS on the matter. The IACHR is composed of seven independent members who are elected by the OAS General Assembly in their personal capacity, and do not represent their countries of origin or residence.