IACHR Releases Report on the Human Rights Situation in Chile 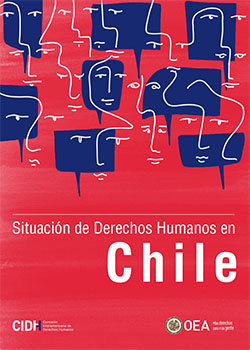 Washington, D.C. – The Inter-American Commission on Human Rights (IACHR) has published the report Situation of Human Rights in Chile, based on the results of an on-site visit to the country over the period of January 25–31, 2020, which took place with the purpose of finding out the underlying causes and consequences of the social protests that started on October 18, 2019. The report assesses Chile's current democratic institutional structure; the historical demands of Chilean society in the context of the social protest, as well as the response of the Chilean State to the protests; and the measures taken by the State to address the demands of the Chilean people.

The IACHR highlights in the report that during the social outburst there were events of excessive use of force by the State, to the detriment of the exercise of the right to peaceful protest. The Commission stresses that democratic States must take into consideration the fact that protests are not a threat to public order, but rather strengthen political participation and contribute to developing greater levels of citizen engagement. The report also recounts those acts of violence that exceeded the limits of peaceful protest. The IACHR further notes that demands during those protests focused on access to and the exercise of economic, social, cultural, and environmental rights and featured calls for equality and non-discrimination and for recognition of the rights of indigenous peoples.

The Commission highlights the Constitutional Convention that was launched on July 4, 2021, with a view to reforming a constitution that has been in place since 1980. This reform is a democratic response to the social crisis in the country, based on national dialogue. This process is a historic step toward reconciliation, as well as a unique opportunity to reverse current problems and launch a new era with full enjoyment of human rights for all people.

At the individual level, the report accounts for the measures adopted by the State to compensate the victims and ensure that the demonstrators are not threatened, harassed, and violated by other people or by agents of the State. In this regard, the report highlights that the State's response to the demonstrations, by law enforcement agencies, was characterized by patterns of violence and excessive use of force, resulting in the loss of 5 human lives by direct action of State agents and 26 deaths in the context of the "social outburst", as well as hundreds of people injured, particularly with eye injuries. These facts are incompatible with Inter-American human rights standards and with the international obligations acquired by the State of Chile in this matter. The report also highlights the measures adopted to address the social demands that gave rise to the outbreak.

This report has been published 37 years after the IACHR's last comprehensive assessment of the situation of human rights in Chile. It looks into the right to freedom of expression as the main focus of the protests that started in 2019 and examines society's demands concerning economic, social, cultural, and environmental rights and their cross-sectional links to the rights of vulnerable groups. The report highlights the universal, indivisible, and interdependent nature of all human rights and the strong bond between civil and political rights, on the one hand, and economic, social, and cultural rights, on the other. The report also addresses different topics from an intersectional perspective, including age, ethnic and racial background, gender, sexual orientation and gender identity and expression, to assess the specific context of these human rights violations.

Finally, the Inter-American Commission hopes this report will contribute to ensuring the full enforcement of human rights in Chile, calling on the State to step up its efforts to comply with report recommendations and to keep up a respectful, honest dialogue with international human rights organizations and with Chilean society. The Commission stresses its willingness to provide technical assistance and to engage in further talks based on its own role and mandate.