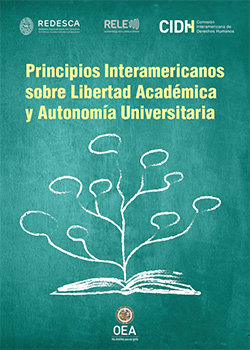 Washington, D.C. – The Inter-American Commission on Human Rights (IACHR) is issuing—along with its Special Rapporteurship for Freedom of Expression and its Special Rapporteurship on Economic, Social, Cultural, and Environmental Rights—a Declaration of Inter-American Principles on Academic Freedom and University Autonomy, in order to improve protection and safeguards for academic freedom in the Americas.

This declaration of principles applies to higher education and stresses the importance of science and knowledge as public goods and as pillars of democracy, the rule of law, sustainable development, diversity of ideas, and academic progress. Science and knowledge are essential elements of all free, open, plural, fair, and equal societies.

In its declaration, the IACHR expresses its concern about allegations made in various countries in the Americas regarding repression against student groups and student unions, and also regarding harassment, attacks, and budget cuts affecting academic institutions, as well as about other forms of retaliation against members of academic communities based on arbitrary or discriminatory measures.

Through their research, critical thought, and involvement in debate on various matters of public interest, students, teachers, academic staff, researchers, and academic institutions are vulnerable in undemocratic contexts and may face restrictions, risks, and human rights violations. The Commission stresses the crucial role they play as sources of knowledge and agents of scientific progress and of the promotion of democratic principles and human rights.

Academic freedom is an independent and interdependent human right which plays the role of enabling the exercise of various rights, among other things by protecting the rights to freedom of expression, education, freedom of association, equality before the law, freedom of conscience and religious freedom, and labor and union rights, all of them held in the American Declaration of the Rights and Duties of Man, the American Convention on Human Rights, and the Universal Declaration of Human Rights.

These are the issues addressed in this declaration: the scope to protect academic freedom; the autonomy of academic institutions; non-discrimination; protection from State interference; protection from violence; the inviolability of academic spaces; restrictions and limitations of academic freedom; ban on censorship and exceptionality regarding the exercise of State sanctions; protection from and prevention of the actions or omissions of private individuals; education concerning human rights; access to information; the Internet and other technologies; the duty to preserve plural audiences and freedom of association; protection of international mobility and cooperation; inclusive dialogue within higher education; and implementation duties.