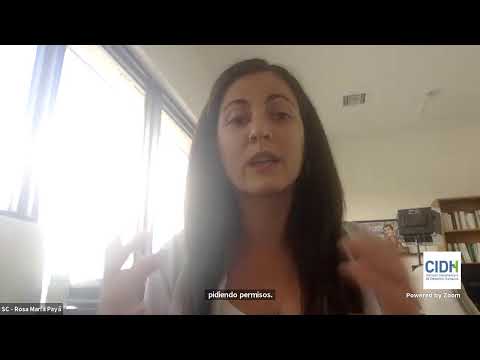 Hearing: situation of human rights in the protest context in Cuba

Washington, D.C. – The Inter-American Commission on Human Rights (IACHR) is concerned about tougher repression in Cuba, which is evident in violations of judicial guarantees and disproportionate sentences (of up to 25 years in jail) against individuals who took part in protests on July 11. The Commission urges the State to ensure due process, in compliance with inter-American standards, for all these detainees who have been charged with crimes.

The IACHR has documented different stages in State repression since July 11. In a press release that was issued on July 15, 2021, the Commission and its Special Rapporteurships condemned repression and the use of force by the State in the protest context. They urged the State to fully guarantee the right to protest and to respect international human rights standards regarding the State's use of force and due diligence to investigate any allegations. Later, in a press release issued on August 12, 2021, the Commission and its Special Rapporteurships expressed their profound concern about the many complaints of arbitrary arrests and violations of minimal due process guarantees regarding people who took part in these protests. They further called on the State to end repression, guarantee due process, and ensure dignified treatment for anyone in its custody.

During the hearing on the situation of human rights in the protest context in Cuba that was held on October 21, almost four months after the July protests, civil society organizations denounced that judicial proceedings tended to criminalize protest participants and that public prosecutors were requesting long sentences. Civil society organizations also complained that judicial guarantees were conspicuously being violated in these proceedings. These organizations alleged that detainees were being held incommunicado and subjected to interrogation aimed at intimidating them, and that they were not being granted access to appropriate legal counsel.

The IACHR notes that, out of more than 600 individuals who remain detained, 598 are in pretrial detention. This includes 396 people whose cases are still under investigation and 202 whose cases have reached the trial stage, according to the organization Cubalex. For the latter group, public prosecutors have reportedly requested deprivation of liberty sentences of 5–25 years for 198 individuals, including six adolescents.

Concerning other procedural violations, the available reports indicate that many of these detainees are being held incommunicado for weeks, and that they only have limited opportunities to communicate with their families and legal counsel. In particular, civil society organizations have expressed their concern about how dissident leaders who are currently deprived of liberty—including José Daniel Ferrer García (the leader of the Patriotic Union of Cuba), Félix Navarro (president of the Party for Democracy), and Luis Manuel Otero Alcántara (a member of the San Isidro movement)—are being held incommunicado or being allowed only restricted contact with the outside world.

Most of these detainees have allegedly been subjected to interrogation aimed at intimidating them, and they have not been granted access to appropriate legal counsel. According to a civil society report of October 19, 2021, these individuals had to wait days before being told the reasons for their arrest, and their families and legal counsel have only rarely had access to their criminal records and to the court decisions concerning them.

In this context, the IACHR urges the State to ensure that the crime categories held in its legislation are not inappropriately used to restrict other rights or to counter dissidents. Further, the State must take all measures necessary to prevent investigations from leading to unfair or baseless trials against individuals who legitimately stand up for their own rights through social protest. The State must therefore ensure the guarantees of due process for all the people arrested and charged in the context of the protests, in compliance with inter-American standards.