World Day Against Trafficking in Persons: IACHR Calls on States in the Americas to Adopt Effective Measures to Prevent and Combat the Disproportionate Impact of Trafficking on the Victimization of Women, Adolescents, and Girls 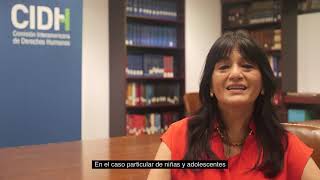 Washington, D.C. — As part of the commemoration of World Day Against Trafficking in Persons, the Inter-American Commission on Human Rights (IACHR) expressed its concern over the disproportionate impact that trafficking has on the victimization of women, adolescents, and girls, especially in connection with practices of sexual exploitation. It therefore urged States in the region to adopt measures that include a human rights approach, with intersectional and gender perspectives that will help prevent and eradicate this menace.

The IACHR noted with concern that, according to the United Nations Office on Drugs and Crime (UNODC) Global Report on Trafficking in Persons, 79% of all trafficking victims in Central America and the Caribbean are women and girls, and 40% of all victims are girls and adolescents. The figures for the latter population are the highest in the world. The situation is similar in South America, where 69% of victims are women. Likewise, according to UNODC, most victims in the Americas and the Caribbean are trafficked for the purpose of sexual exploitation.

In this regard, the IACHR has observed through its various mechanisms that there is a close relationship between human trafficking and the gender-based violence and discrimination faced by women, adolescents, and girls in the region. On this point, in the Report on Violence and Discrimination against Women, Girls and Adolescents: Good Practices and Challenges in Latin America and the Caribbean, the IACHR found that women, girls, and adolescents are particularly exposed to being captured by male-dominated criminal structures with sexist hierarchies and to suffering multiple forms of violence. In the same report, the IACHR stressed that the intersectionality of factors for discrimination against women, girls, and adolescents makes them more vulnerable and aggravates the impacts of this discrimination.

Specifically, in the report on Violence, Children, and Organized Crime, it was noted that girls and adolescents are at particular risk of falling victim to different forms of trafficking and sexual exploitation, including sex tourism, child pornography, and trafficking for labor exploitation. In addition, the IACHR has warned of the existence of specific risks facing women, adolescents, and girls who belong to particularly vulnerable groups, and which derive from the intersectionality of factors that result in greater discrimination.

Furthermore, based on data and studies compiled by the World Health Organization (WHO) and the Pan American Health Organization (PAHO), the IACHR stressed that the disproportionate effects of trafficking on women, adolescents, and girls include 1) serious physical harm that derives from ongoing physical aggression, ill-treatment, degrading living conditions, and the deprivation of basic needs; 2) effects on sexual and reproductive health, such as rape and sexual abuse, abortion and unwanted pregnancy, loss of reproductive capacity, and sexually transmitted diseases; 3) dependence on medication and drugs; and 4) heightened psychological consequences.

In response to these circumstances, the IACHR warned that in accordance with Resolution 04/2019, all actions that States implement to prevent trafficking, assist victims of this, and cooperate toward eradicating it must include a gender perspective and the best interests of the child into account, while refraining from criminalizing migrants who are victims of this crime. To this end, States should work from a human rights perspective to comprehensively prevent and combat behavior or crimes that lead to or aggravate the contexts of exploitation or violence surrounding human trafficking, such as exploiting the prostitution of others or other forms of sexual exploitation, forced labor or service, slavery and practices that are similar to slavery, servitude, or the removal of organs.

The IACHR once again noted the importance of addressing and eliminating the impunity surrounding these crimes to prevent gender-based violence from being tolerated and perpetuated. In this regard, the Inter-American Court of Human Rights (IA Court) has emphasized that an environment of impunity facilitates and promotes the repetition of acts of violence and send the message that violence against women is tolerated and acceptable. This favors the continuity and social acceptance of this sort of violence and leads to women feeling unsafe and experiencing persistent distrust in the justice system.

Given the disproportionate impact that trafficking has on the victimization of women, adolescents, and girls, the IACHR urged States to target its structural causes, such as the perpetuation of gender stereotypes and the sexist, patriarchal structures that tolerate gender violence, and to adopt effective measures to assist and protect women, adolescents, and girls who are victims of trafficking in order to reduce the physical, psychological, sexual, and reproductive consequences of this. It also reiterated that States have the obligation to prevent, punish, and eradicate violence such as trafficking, taking into account the particular vulnerability of specific groups of women due to their racial or ethnic origin or their status as migrants, refugees, or displaced people.

Finally, the IACHR once again noted that States are obliged to investigate and punish those responsible for this crime, to provide victims with assistance that includes a gender perspective and differentiated approaches regarding groups of women that have historically been subjected to discrimination. It also noted that granting protection mechanisms that include the regularization of the migration status of people in movement is an essential part of providing comprehensive protection for human rights, as is ensuring that individuals can take part in investigation processes as witnesses or in other roles and can do so in a spontaneous fashion that prevents revictimization. These measures aim to ensure that cases can be truly investigated and tried so as to eliminate the impunity surrounding these crimes to prevent gender-based violence from being tolerated and perpetuated.

A principal, autonomous body of the Organization of American States (OAS), the IACHR derives its mandate from the OAS Charter and the American Convention on Human Rights. The Inter-American Commission on Human Rights is an autonomous organ of the Organization of American States whose principal functions are to promote the observance and defense of human rights and to serve as an advisory body to the Organization in this area. The Commission is composed of seven independent members who are elected in an individual capacity by the OAS General Assembly and who do not represent their countries of origin or residence.