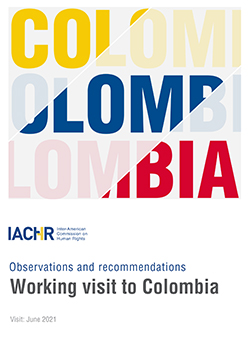 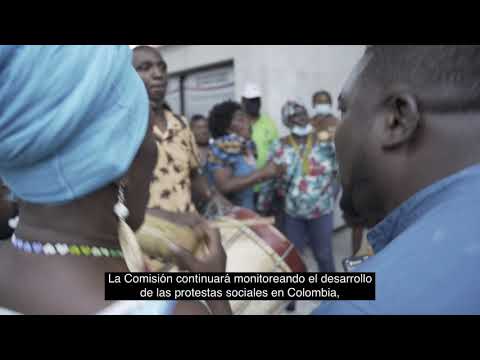 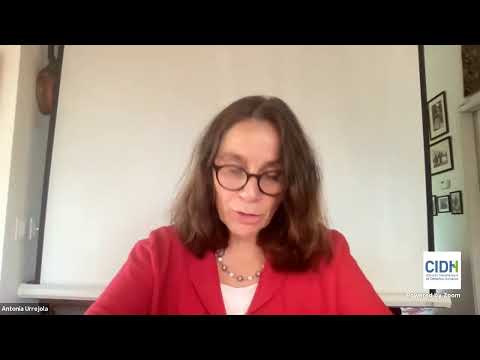 The IACHR notes that the observations and recommendations attached to this press release are based on the standards of the Inter-American Human Rights System concerning the right to protest, the disproportionate use of force, sexual and gender-based violence, an ethnic-racial focus, the use of protection transfers and disappearances, the use of disciplinary powers, military assistance, and the application of military criminal courts, the protection of journalists, freedom of expression, and Internet access, among other aspects.

The Commission has assessed the country context in which the protests started, stressing the call for dialogue to overcome social conflict, as well as the need for investigations with due diligence, a comprehensive approach that enables reparations for victims and punishment for the people responsible for human rights violations, and the protection of journalists and medical missions.

The IACHR notes that the State of Colombia and Colombian society as a whole stand before a unique opportunity to reverse the current situation and enter a new era of citizen participation. This requires effective, inclusive talks to address the legitimate demands of the people, with the utmost respect for human rights and within the democratic context of the rule of law.

To draft these observations and recommendations, the IACHR took into consideration the information it received before, during, and after the visit from the State, civil society organizations, and various other sectors. Further, the Commission took into consideration the information it received in testimonies during the visit. The Inter-American Commission notes that it received 2,908 requests to provide testimony, of which—prioritizing representativeness and diversity—it gathered a total of at least 302 individual and collective testimonies. This involved listening to more than 500 people, in testimonies that were adequately recorded, systematized, and assessed. The methodology that was used in these testimonies prioritized dialogue, privacy, and interviewee safety and trust.

During this working visit, the Commission further met with authorities from the various branches of political power and oversight mechanisms, at the national, departmental, district, and municipal levels. The IACHR also met with various victims of human rights violations, rights defenders, groups of women, Afro-descendant persons, and indigenous persons, journalists, representatives of social movements, business associations, and law enforcement officers. The Commission further met with the representative of the United Nations Human Rights Office in Colombia and with foreign diplomats posted in the country.

The Inter-American Commission again stresses its solidarity with all the victims of human rights violations in the context of the protests, and with their families. We need to honor the people who were killed, the women who were victims of sexual violence, and the individuals who suffered eye injuries and who went missing. The Commission notes the importance of doing justice and providing reparations for victims, for victims' own sake and to enable a process of social reconciliation, dialogue, and affirmation of the social rule of law.

The Commission is launching a Special Monitoring Mechanism for Human Rights in Colombia, to support the consolidation of peace within the various sectors of Colombian society.

The IACHR delegation in this working visit was made up of IACHR President Antonia Urrejola, Commissioners Joel Hernández and Stuardo Ralón, Executive Secretary Tania Reneaum Panszi, Assistant Secretary for Monitoring, Promotion, and Technical Cooperation María Claudia Pulido, Special Rapporteur for Freedom of Expression Pedro Vaca, and members of the technical staff of the Executive Secretariat and the Rapporteurship for Economic, Social, Cultural, and Environmental Rights. The delegation visited the cities of Bogotá, Cali, Tuluá, Buga, and Popayán.

The Commission thanks Colombia for opening itself up to international scrutiny, for the constructive dialogue that took place, for the generous supply of information, and for the will to create pathways for technical cooperation. The IACHR similarly stresses its gratitude for the trust shown by victims of human rights violations, by civil society organizations, and by Colombian citizens more generally. The Commission further thanks the Mission to Support the Peace Process in Colombia (MAPP-OAS) for the support it provided throughout the visit.