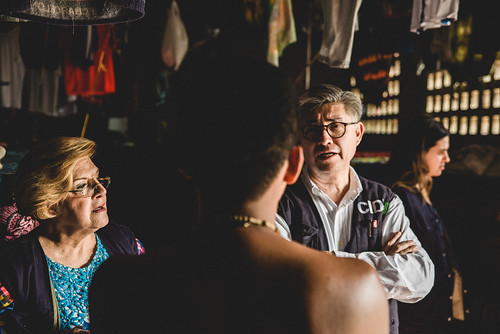 The Inter-American Commission on Human Rights (IACHR) concluded its on-site visit to El Salvador from December 2 to 4, which aimed to observe on the ground the human rights situation in the country, in particular, issues related to citizen security and the situation of persons deprived of liberty; memory, truth, justice, and access to justice; the situation of the rights of women and LGBTI persons; and the situation of migrants, displaced persons and economic, social, cultural and environmental rights. Additionally, as transversal axes, it paid attention to freedom of expression, the situation of human rights defenders and justice operators, and other groups at particular risk.

The visiting delegation was made up of the President of the IACHR, Esmeralda Arosemena de Troiti±o, the First Vice President, Joel Hernßndez, the Second Vice President, Antonia Urrejola; Commissioners Flavia Piovesan and Margaret May Macaulay - Country Rapporteur for El Salvador - and Commissioner Luis Ernesto Vargas. The delegation was also made up of the Executive Secretary, Paulo AbrŃo, and technical staff of the Executive Secretariat. 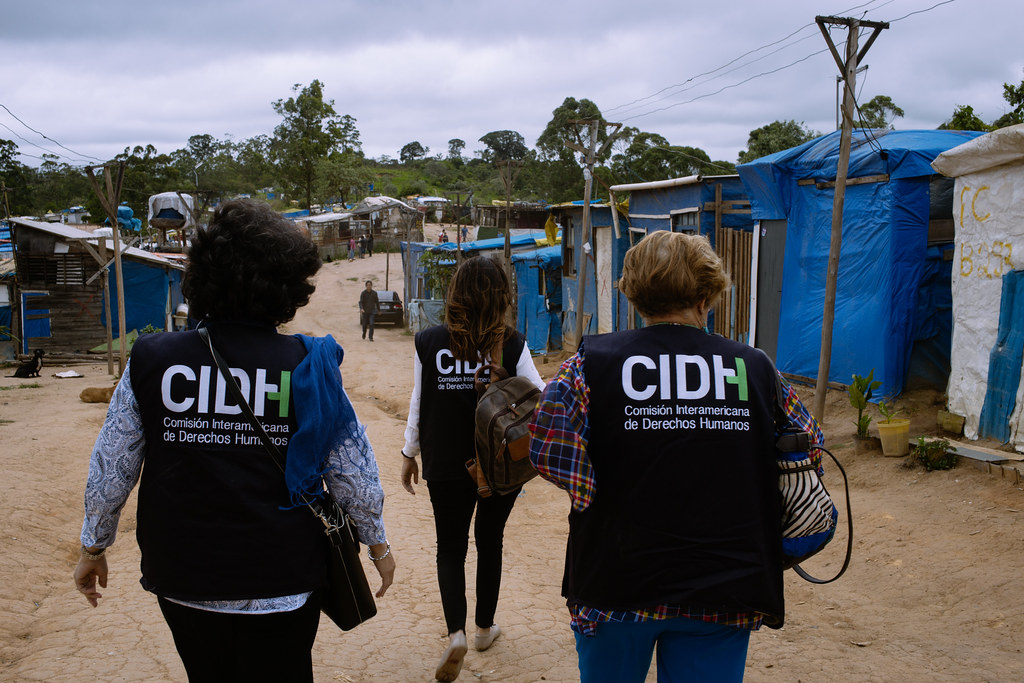 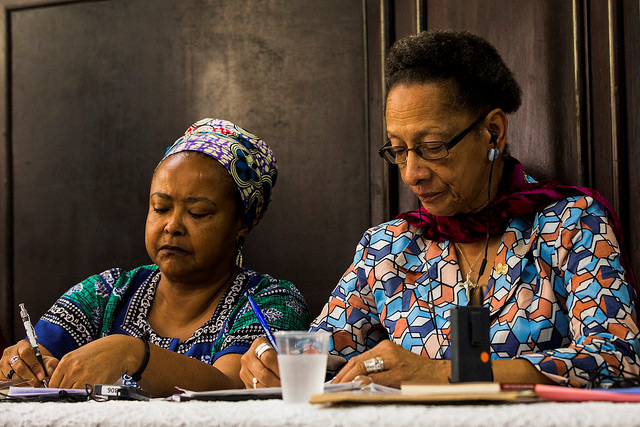 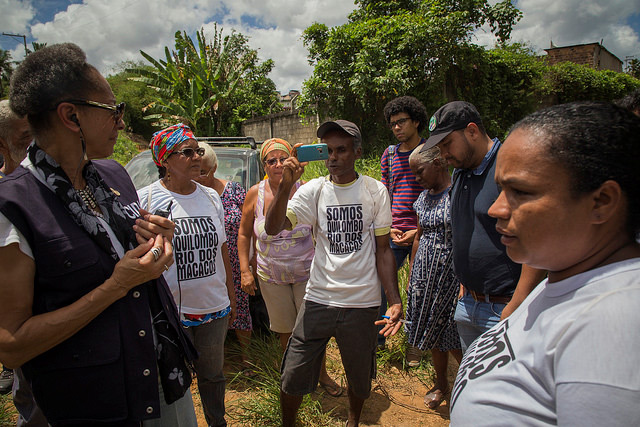 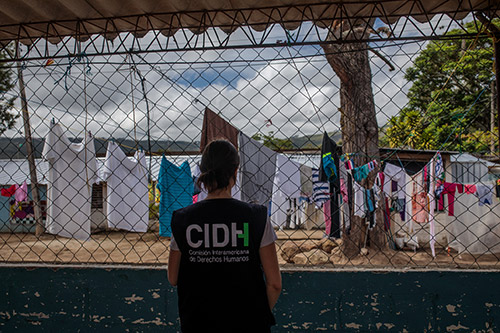 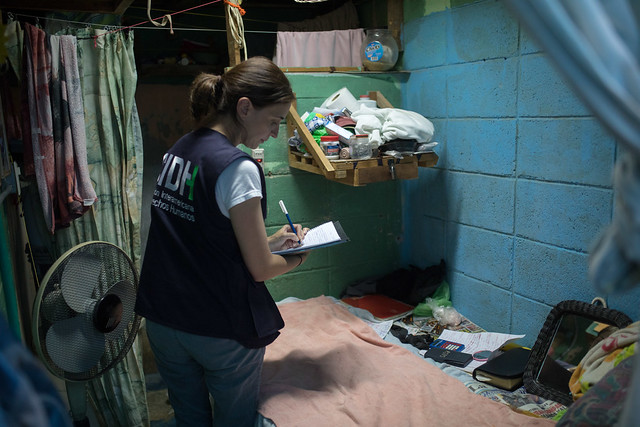 The Inter-American Commission on Human Rights (IACHR) conducted an on-site visit to Honduras between July 30 and August 3, 2018. The aim of the visit was to observe the human rights situation in the country on the ground.

The IACHR carried out an observation in the field on the human rights situation in the country, addressing various issues, including the situation of the rights of persons deprived of liberty. The Inter-American Commission held meetings with government authorities; with representatives and organizations of civil society, human rights defenders, indigenous authorities, international organizations, academics, journalists, and the private sector. It also collected testimonies from victims of human rights violations and their next of kin. In particular, the IACHR made unrestricted visits to various regions including Tegucigalpa, San Pedro Sula, Tela, Puerto Lempira, Bajo Agußn, and toured detention centers, in particular, it visited the First Infantry Battalion of the Honduran Armed Forces, in the municipality of Tegucigalpa; the Third Infantry Battalion, in Naco, Cortķs; the National Feminine Penitentiary for Social Adaptation (PN-FAS), the Center for the Deprivation of Liberty for Adolescents, ōRenazandoö, in the Village of Tamara; and the Choluteca National Penitentiary, in La Trinidad, Choluteca. 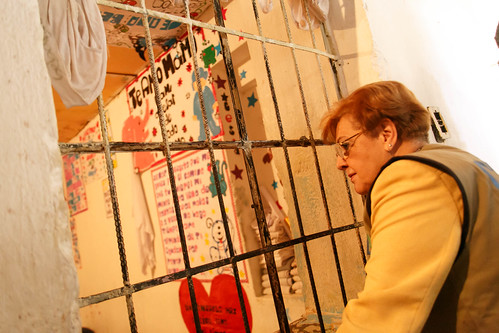 The Inter-American Commission on Human Rights (IACHR) made an on-site visit to Guatemala from July 31 and August 4. The IACHR observed on the ground a serious situation of inequality and discrimination that particularly affects indigenous people; women; displaced persons; lesbian, gay, bisexual, trans, and intersex persons (LGBTI), Afro-descendant persons, persons with disabilities; persons deprived of liberty; and children and adolescents.

The IACHR verified the persistence of multiple factors that contribute to a situation of structural impunity. In addition, the Commission received information regarding the State's authorization of extractive industry activities and projects and development of natural resources in indigenous peoples' territories, without prior consultation to obtain consent. The IACHR also received information on violence against journalists, as well as on the concentration of media ownership. The Commission drew attention to the particularly vulnerable situation that women in Guatemala continue to face, especially indigenous women. Likewise, the IACHR received with great concern the lack of recognition of Afro identity in the country. In relation to the rights of LGBTI persons, the Commission expressed its concern regarding the draft "Law for the Protection of Life and Family," which seeks to ban teaching about sexual diversity and reaffirms the nature of marriage as a right exclusive to persons of the opposite sex. The IACHR received extensive information on how multiple causes have led to the forced displacement of tens of thousands of people, contributing to the crisis of displaced persons and refugees. As to the situation of persons deprived of liberty, the prison system is mainly characterized by overcrowding, excessive use of pretrial detention, deplorable detention conditions.

The IACHR visited the Casa Para Ni±os Aleluya; the Juvenile Center for the Deprivation of Liberty for Men (CEJUPLIV ōStage IIö), in San Josķ Pinula; the Youth Center for the Deprivation of Liberty for Women (CEJUPLIM- ōGorrionesö); the jails located in Basement 1, of the Tower of Courts of the Judicial Organism; the Santa Teresa Preventive Detention Center for Women; the Women's Guidance Center (COF), the Pav¾n Penal Rehabilitation Farm, and the ōFederico Moraö National Mental Health Hospital.

Finally, the IACHR found that, despite the important progress in the fight against corruption and impunity led by the International Commission against Impunity in Guatemala (CICIG) and the Public Prosecutor's Office, as well as the efforts of some judges-a series of challenges identified by the IACHR in its country report continue to exist today. 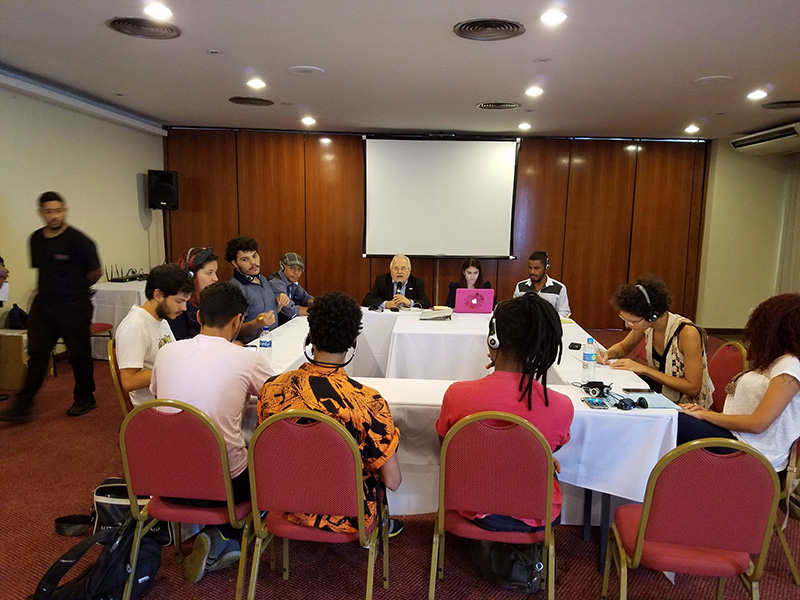 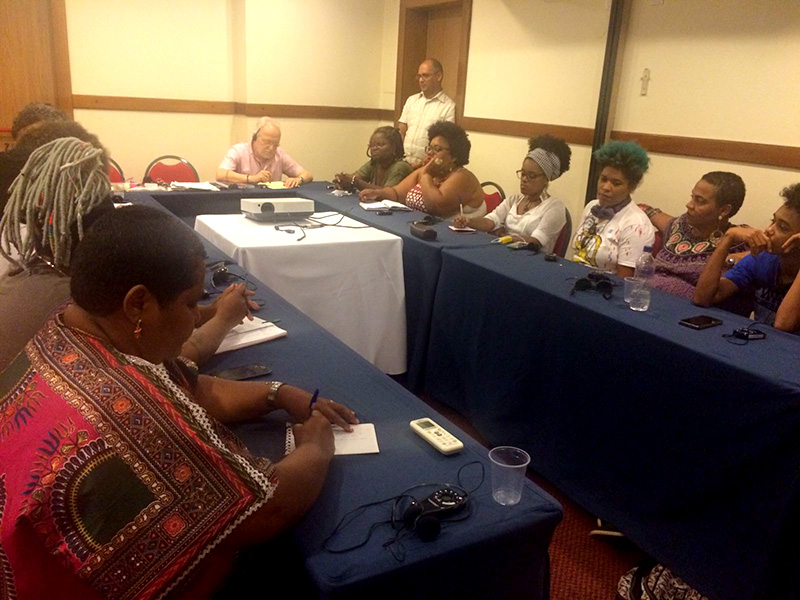 Between October 31 and November 5, 2016, the Commissioner and Rapporteur on the rights of LGBTI persons, Francisco Eguiguren Praeli, accompanied by the fellow who supports the work of the Rapporteurship, made a promotional visit to Brazil for Invitation of the Institute of Race, Equality and Human Rights, visiting the cities of Brasilia, Salvador de Bahia and Belo Horizonte. During this visit, the LGBTI Rights Rapporteur launched the report "Violence against LGBTI persons" in Portuguese in the three cities visited. In addition, during the visit, there were multiple meetings with both federal and state agencies that work with the rights of LGBTI people, as well as meetings and panels with civil society organizations to receive information on the issues that affect LGBT people in Brazil. Likewise, the fellow thato supports the work of the Rapporteurship gave a training workshop on the Inter-American Human Rights System to civil society activists in the city of Belo Horizonte, with a focus on LGBT rights. 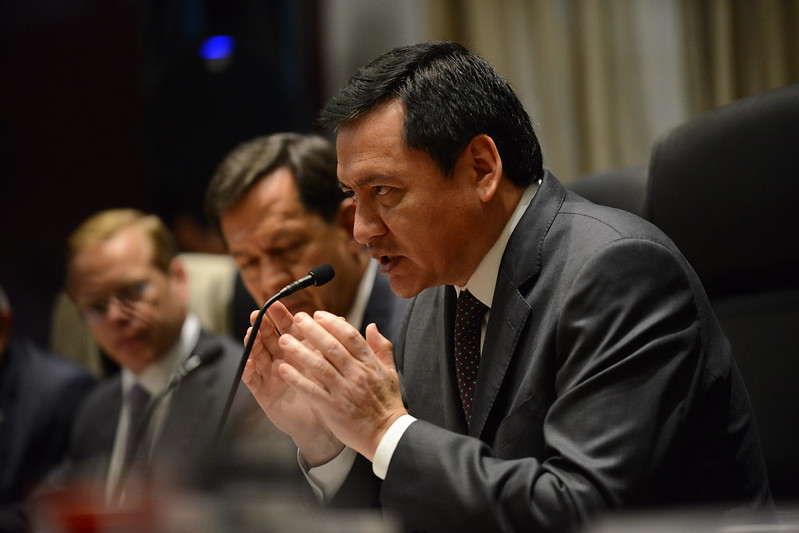 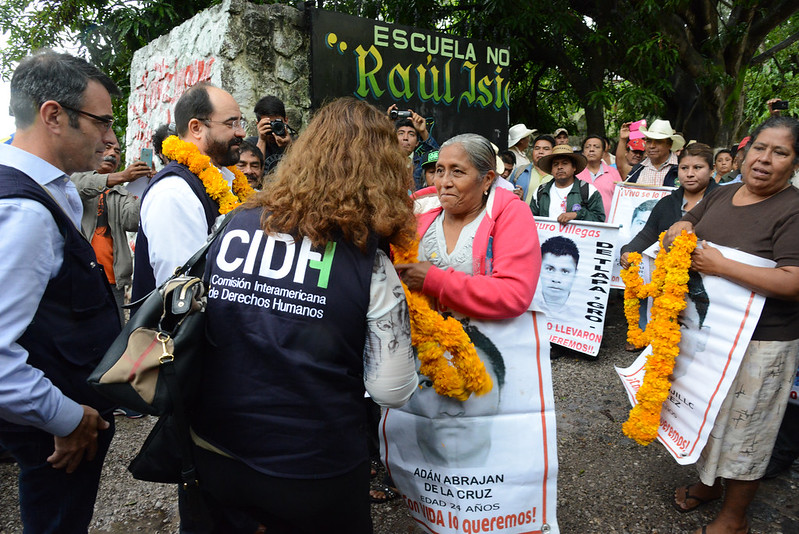 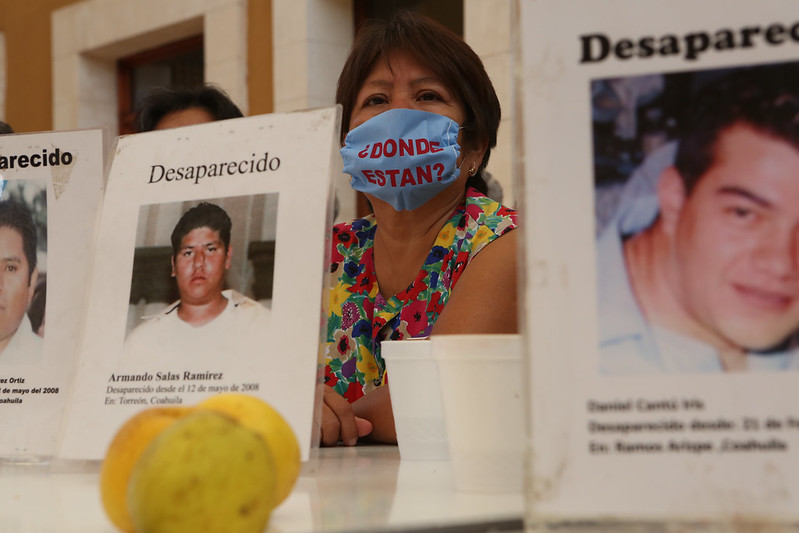 The IACHR carried out an on site visit to Mexico from September 28 to October 2. The Commission has been able to confirm on the ground the serious human rights crisis Mexico is experiencing, which is characterized by a situation of extreme insecurity and violence; serious human rights violations, especially forced disappearances, extrajudicial executions, and torture; critical levels of impunity; and inadequate and insufficient attention to victims and their families. The effect of the violence and violations of fundamental rights is especially serious and disproportionate for people living in poverty, migrants, asylum seekers, refugees, internally displaced persons, women, children, adolescents, human rights defenders, journalists, indigenous peoples, and gays, lesbians, bisexuals, and trans persons (LGBT), among others. Violence against families of victims, human rights defenders and journalists is carried out with the aim of silencing complaints and calls for truth and justice, and perpetuating impunity for gross human rights violations. Violence and intimidation seeks to silence the voices that Mexico most needs.

The Inter-American Commission confirmed the profound gap between the legislative and judicial framework, and the daily reality that millions of people in the country experience. Again and again, throughout the country, the Commission heard from victims that the process of justice is a "simulation." Consequently, at the conclusion of its visit, the Commission expressed it is necessary to address the structural causes of the lack of access to justice in Mexico, such as the infiltration by groups of organized crime in many police bodies, especially at the municipal level, as well as in agencies of the justice system. It is fundamental to strengthen and consolidate judicial independence in Mexico. 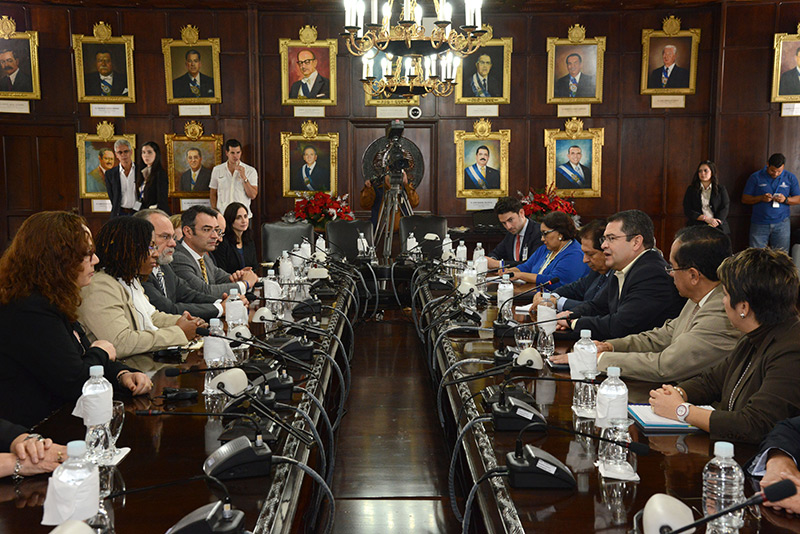 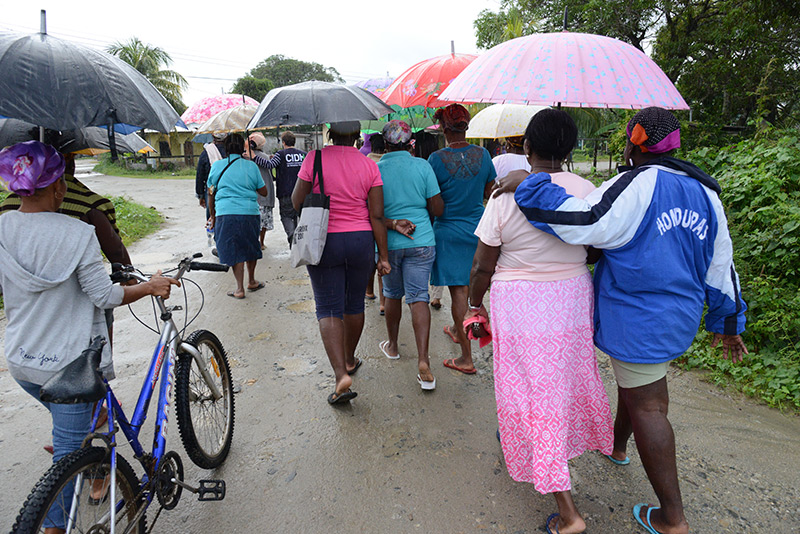 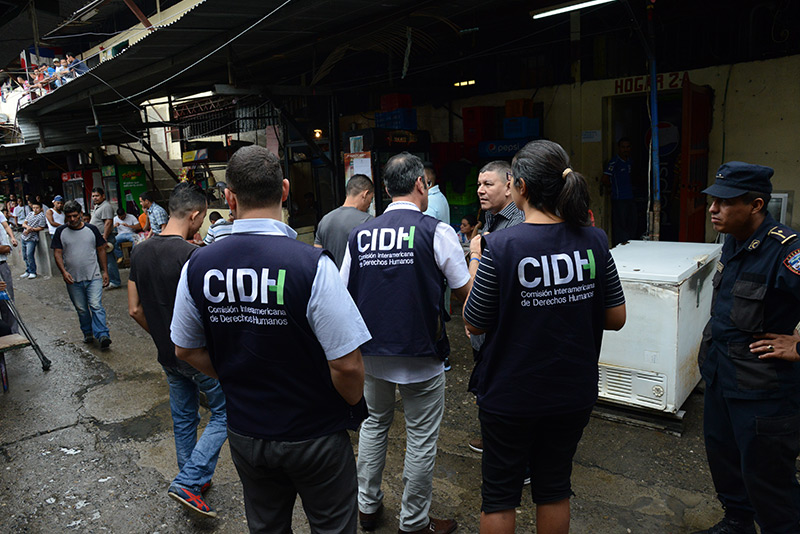 The Inter-American Commission on Human Rights (IACHR) conducted an on-site visit to Honduras on December 1-5, 2014, for the purpose of monitoring the general human rights situation in the country. 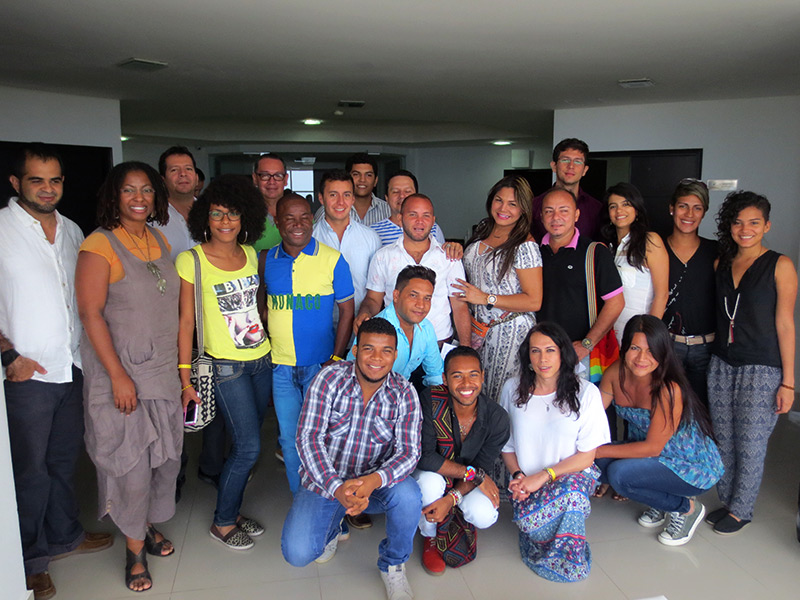 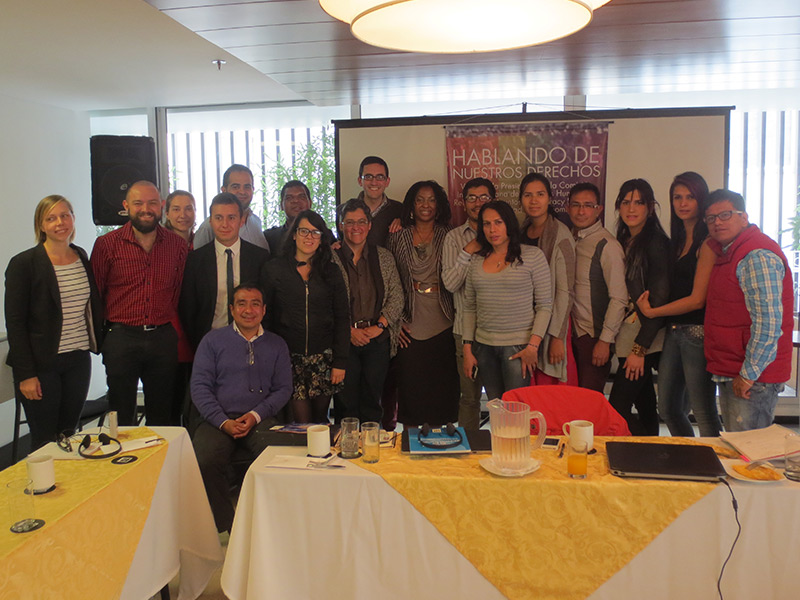 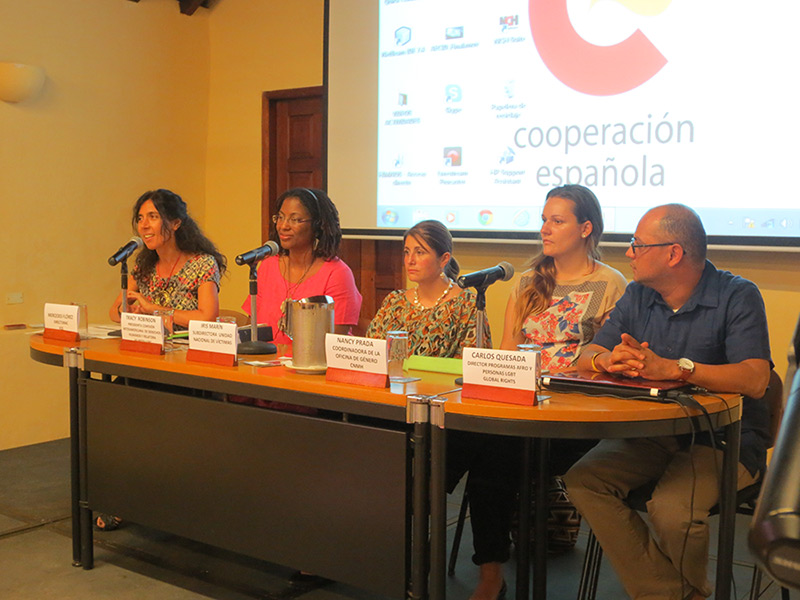 The Chair of the Inter-American Commission on Human Rights (IACHR), Tracy Robinson, visited Colombia, from September 29 to October 3, 2014. In her capacity as Rapporteur for the Rights of Women and Rapporteur for the Rights of Lesbian, Gay, Bisexual, Trans and Intersex people (LGBTI), Commissioner Tracy Robinson visited the cities of Cali, Bogota and Cartagena. The first objective of the visit was to collect information about the challenges that women face in accessing information on violence and discrimination that will be included in a regional report being prepared by the Rapporteur on the Rights of Women. The second objective consisted on meeting with LGBTI human rights defenders and organizations, in order to seek information on the situation of human rights of these persons in Colombia. This information will be included in the regional report being prepared by the LGBTI Rapporteurship on the situation of violence against LGBTI persons.

The IACHR delegation formally requested meetings with state authorities in Cali, Bogota and Cartagena. However, the delegation was informed that, due to the transition in state authorities dealing with human rights, these meetings would not be possible. The delegation met with more than 50 women and civil society organizations. The IACHR delegation organized two events in Cali, one academic and one public, to disseminate the legal standards of the inter-American system on the rights of women and the issue of access to information. 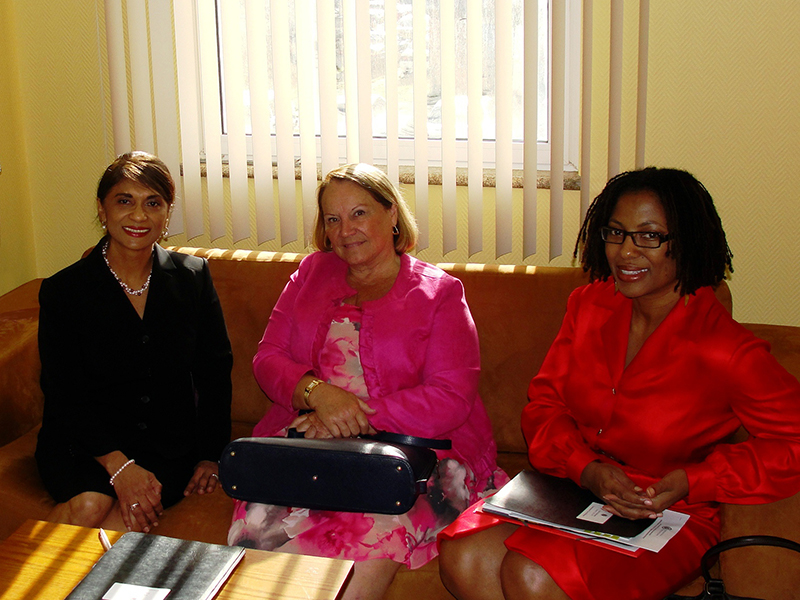 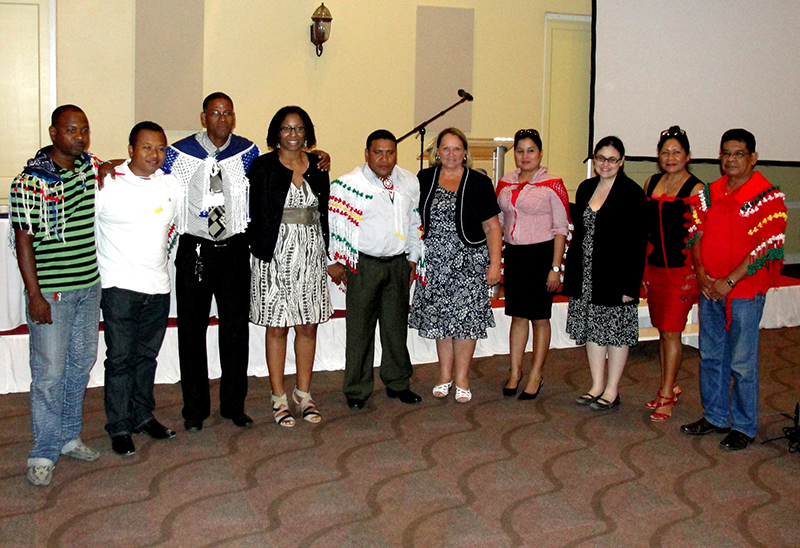 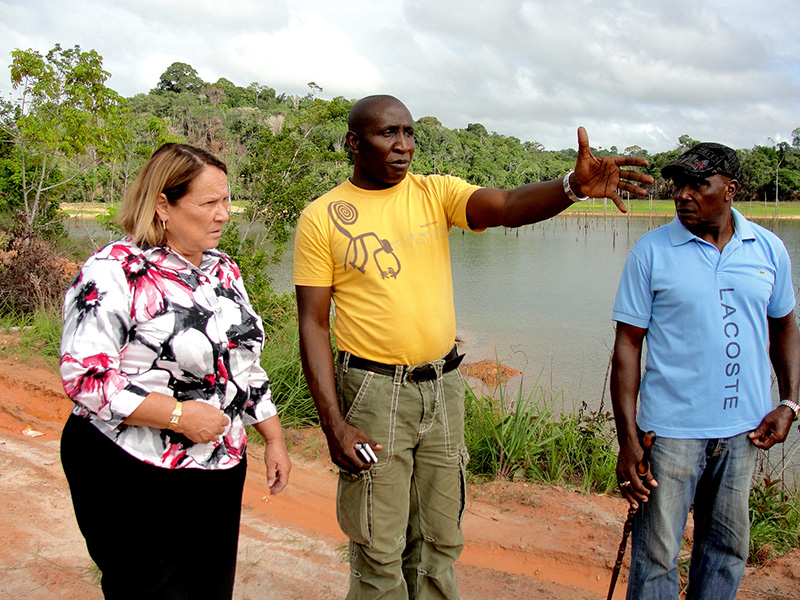 The Inter-American Commission on Human Rights undertook a working visit to the Republic of Suriname between January 23-25, 2013 in order to examine the situation of the rights of women and indigenous peoples. The delegation was composed of Commissioner Dinah Shelton, Rapporteur on the Rights of Indigenous Peoples; Commissioner Tracy Robinson, First Vice-President and Rapporteur on the Rights of Women; and staff from the Executive Secretariat.

During the visit, the delegation held meetings with the highest authorities of the Suriname state, and representatives from civil society organizations dedicated to the defense of the rights of indigenous peoples, women and LGBTI persons in the country. Several members of the delegation also traveled to the district of Brokopondo and the village of Brownsweg to visit a Maroon village composed of 8,000 persons. The delegation offered in a workshop attended by approximately fifty government officials on the Inter-American System of Human Rights and an academic event at the Anton de Kom

University, with the participation of law professors and students. 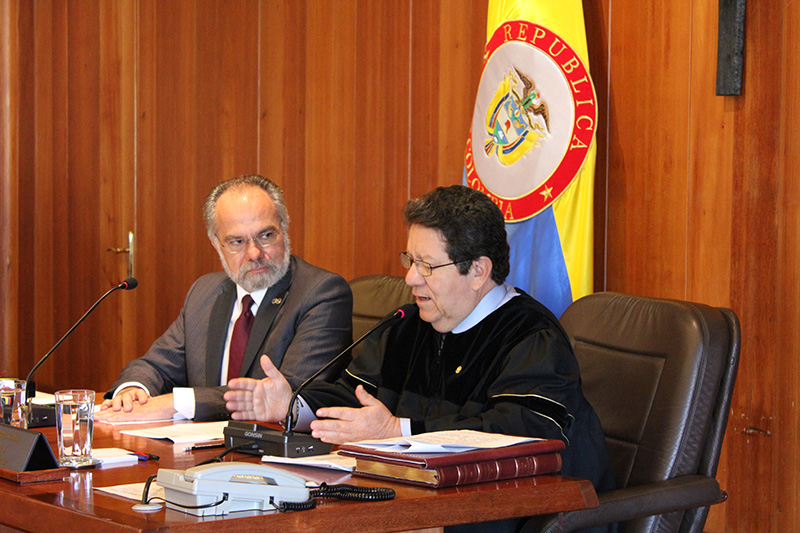 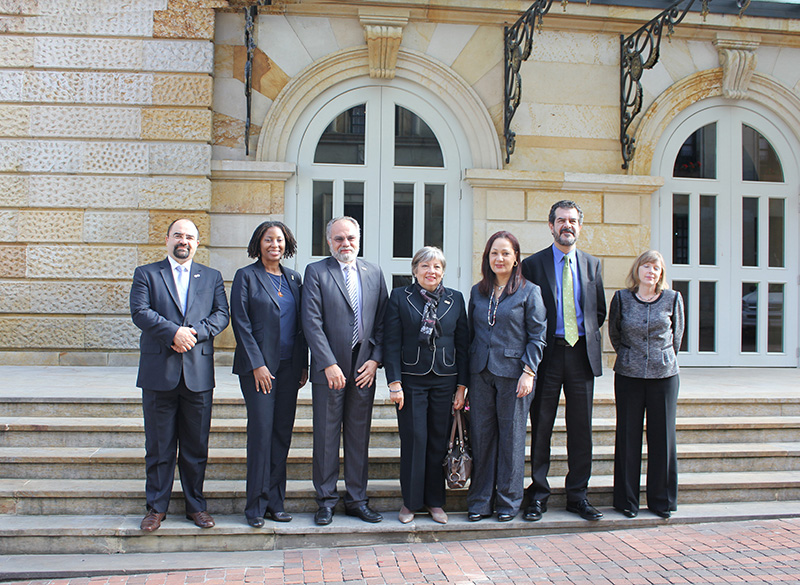 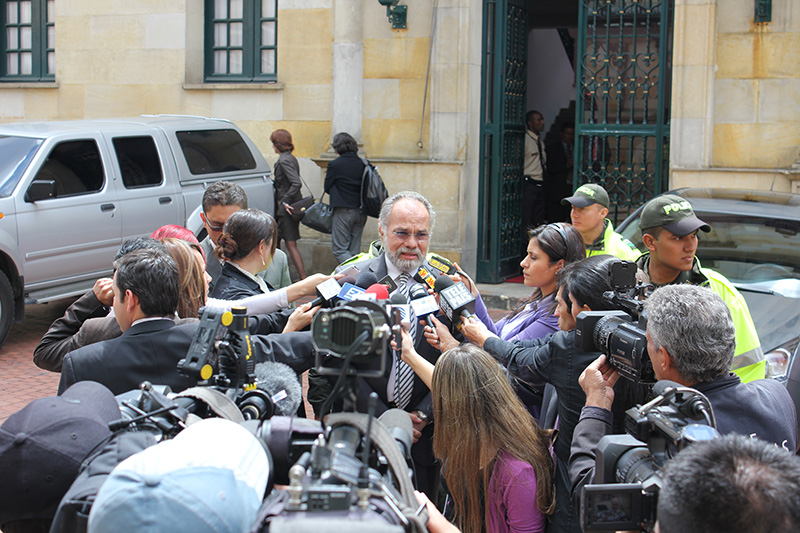 The Inter-American Commission on Human Rights (IACHR) carried out an onsite visit to Colombia December 3 -7, 2012, in response to an invitation from the State, in order to observe the human rights situation in the country. The delegation was composed of the Chair, Josķ de Jes·s Orozco HenrĒquez; the First Vice-Chair, Tracy Robinson; the Second Vice-Chair, Felipe Gonzßlez; and Commissioners Rosa MarĒa Ortiz and Rose-Marie Antoine, as well as Executive Secretary Emilio ┴lvarez Icaza L., Assistant Executive Secretary Elizabeth Abi-Mershed, and staff of the Executive Secretariat. During the visit, various IAHCR delegations visited Bogotß (D.C.), Quibd¾ (Choc¾), MedellĒn (Antioquia), and Popayßn (Cauca), where they met with authorities of the State, civil society organizations, victims of human rights violations, and representatives of international agencies. 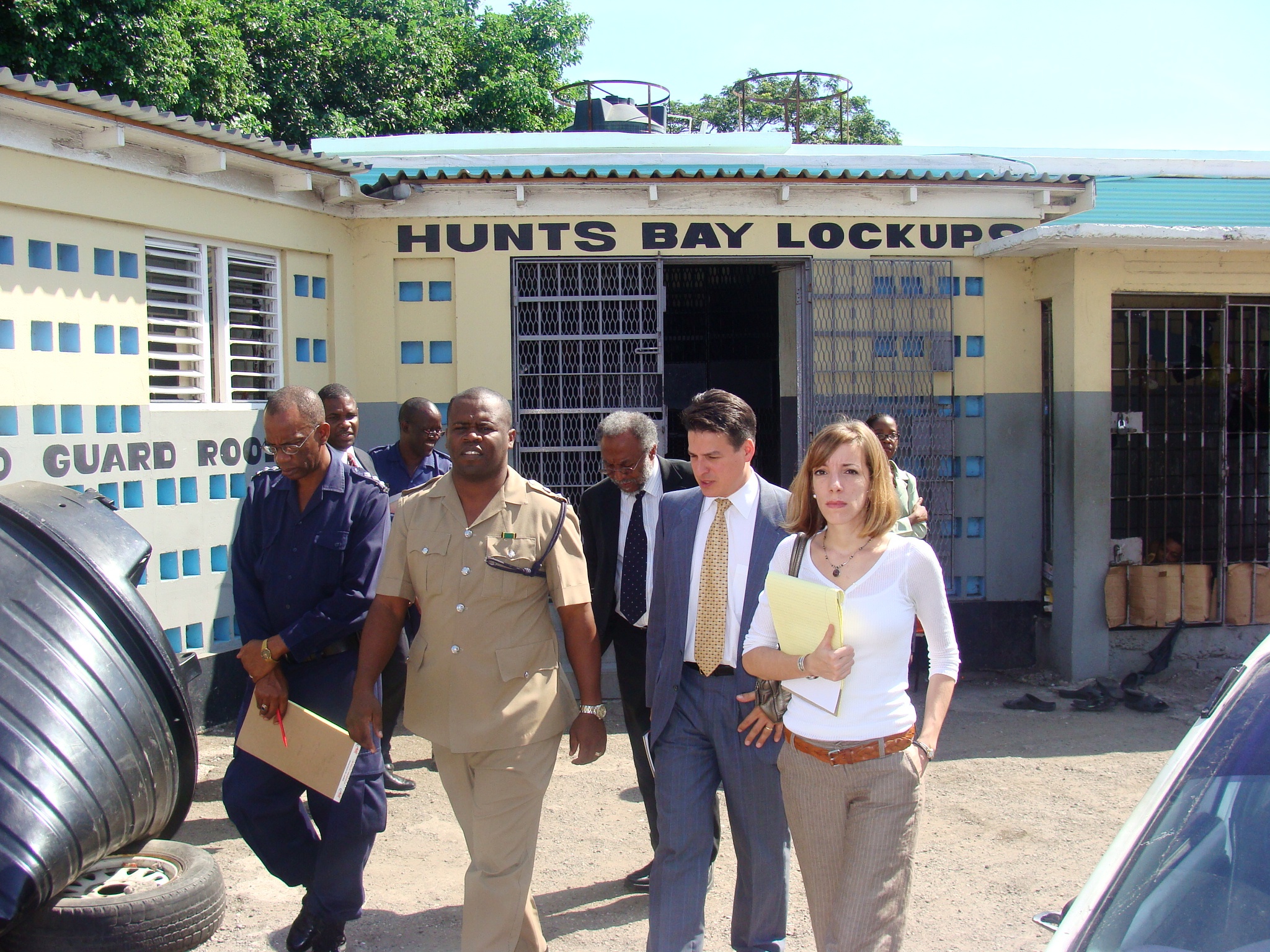 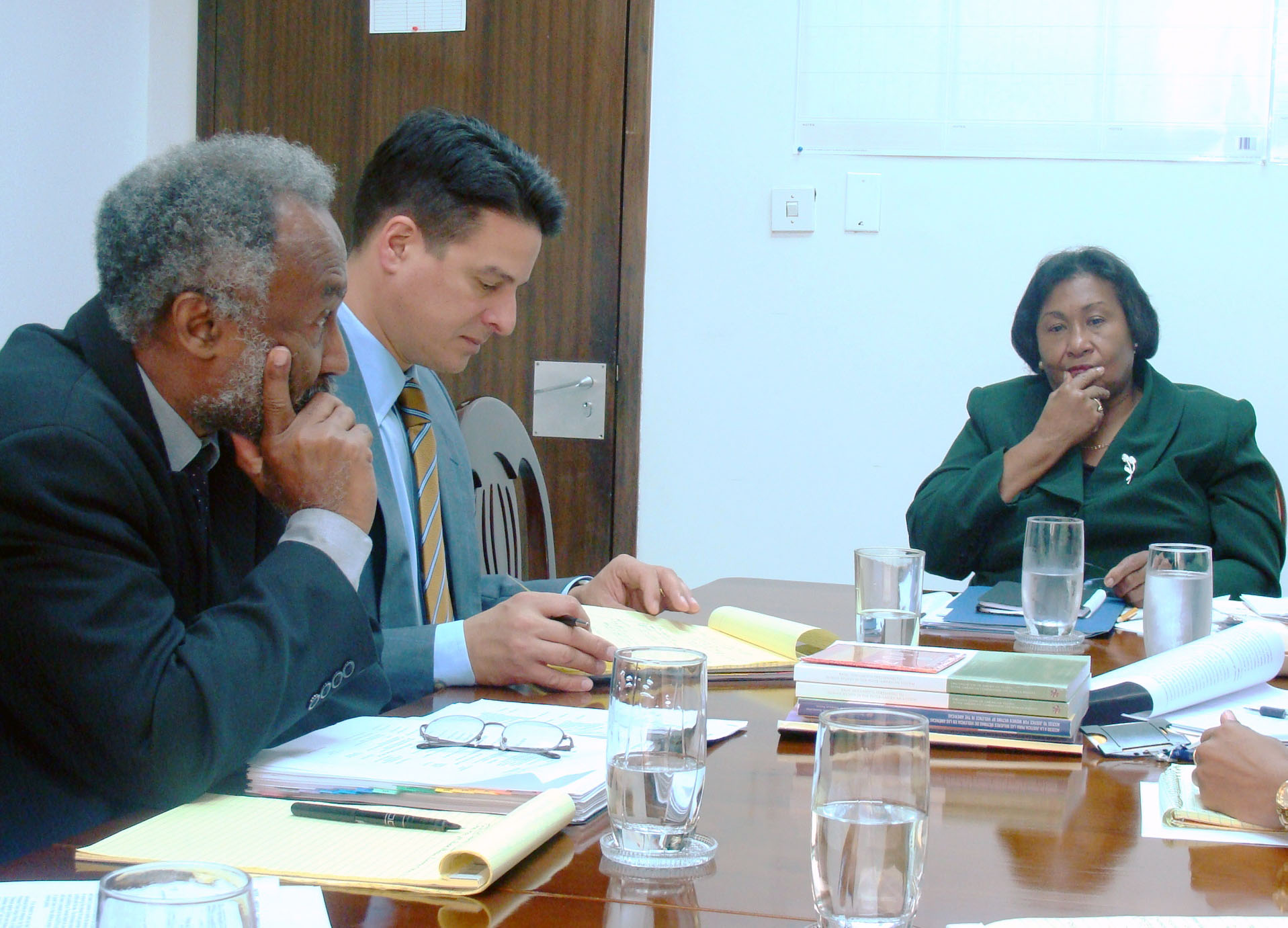 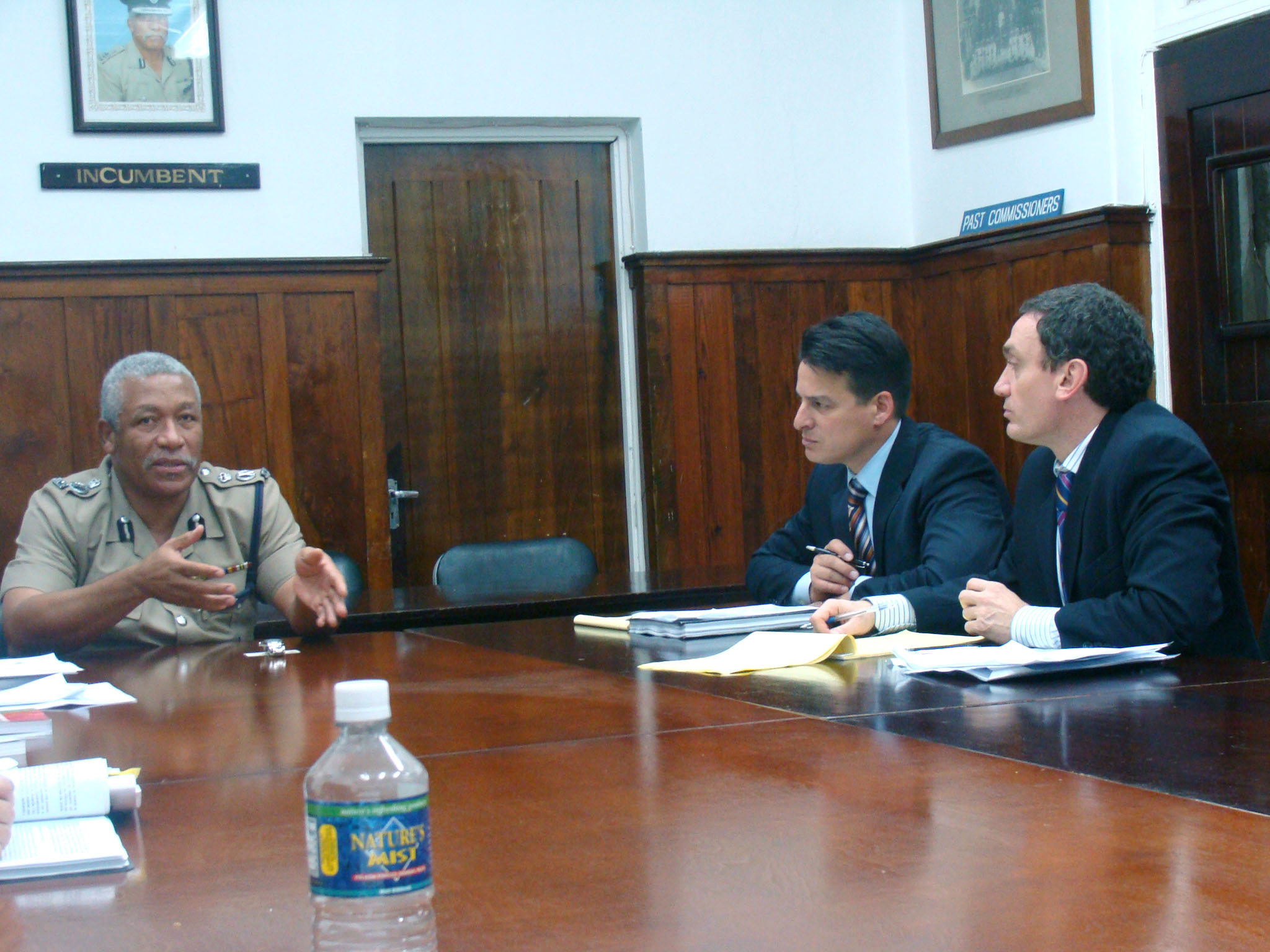 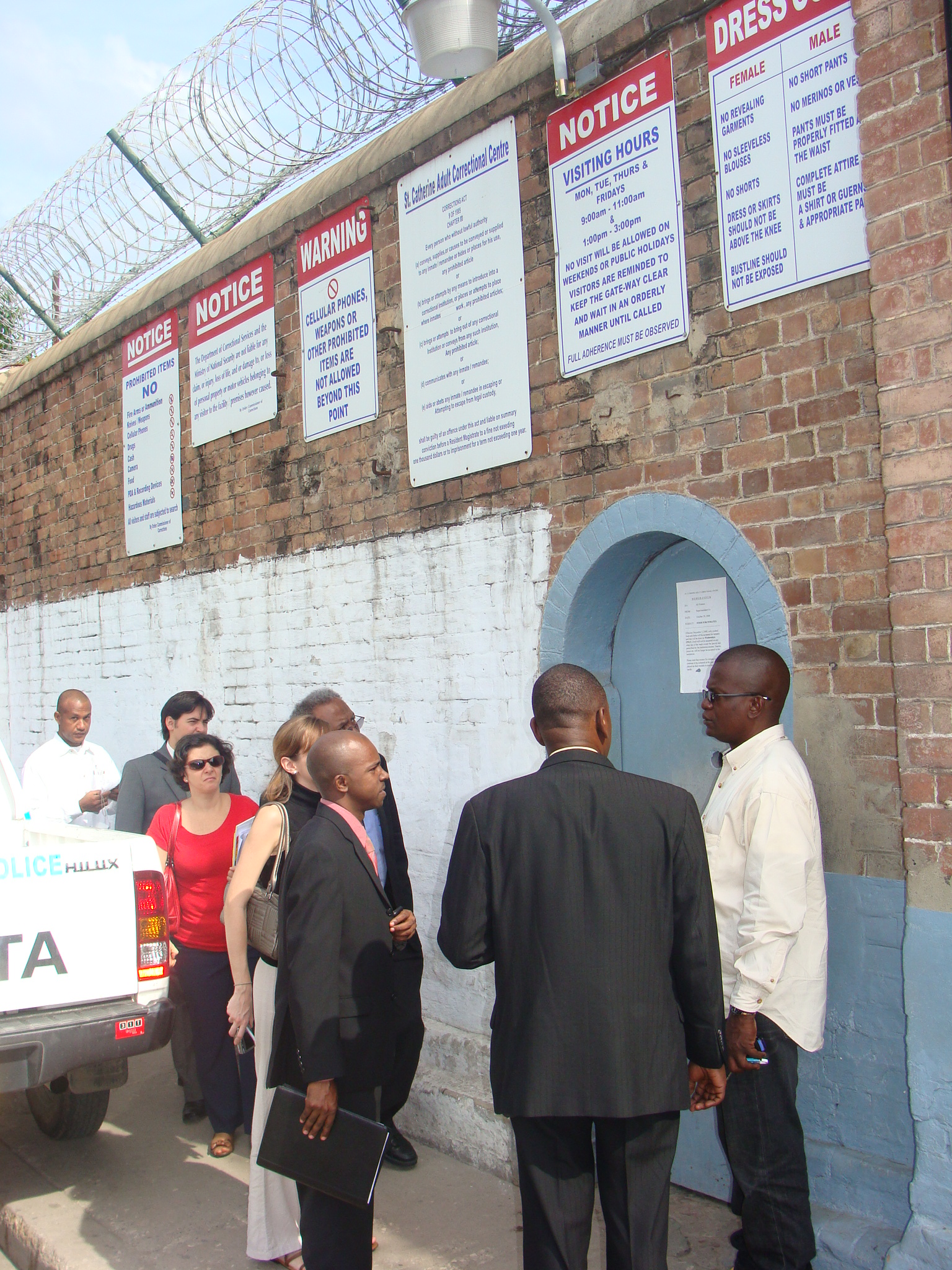 During the visit, the Commission met with representatives of the government of Jamaica and members of civil society. The IACHR also organized a promotional activity in conjunction with the Ministry of Justice and Jamaicans for Justice, and signed an agreement with the Norman Manley Law School that seeks to deepen and strengthen institutional cooperation to promote awareness of the inter-American human rights system in the Caribbean. At the end of the visit, the Commission issued its preliminary observations . The IACHR is currently preparing a report on the human rights situation in Jamaica.