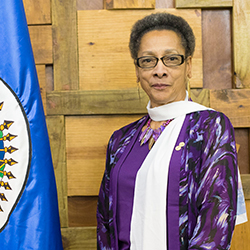 Commissioner Margarette May Macaulay
Rapporteur on the Rights of Older Persons