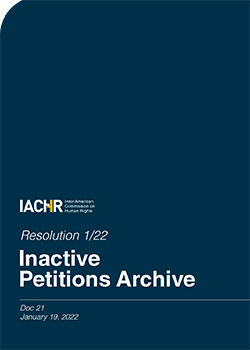 Washington, D.C. – The Inter-American Commission on Human Rights (IACHR) adopted Resolution 1/22 and its annex, to notify stakeholders of moves to close a significant number of petitions that are currently at the initial assessment stage. This resolution emerges in a broader context of IACHR efforts to reduce procedural backlog in its petition and case system.

In this context, taking into consideration the requirements stated in Article 42 of its Rules of Procedure, the Inter-American Commission passed on January 19 Resolution XX/22, which serves as a formal warning that all petitions listed in the resolution's annex are set to be closed. The relevant petitioning parties will be considered to have been notified of this warning on the resolution's issue date. Unless these petitioners respond to the warning, the respective petitions will be closed over the following two months, in compliance with Article 42 of the IACHR's Rules of Procedure.

Petitions' initial assessment procedure is regulated by Articles 26–29 of the Rules of Procedure, which grants the relevant powers to the IACHR's Executive Secretariat. This procedure entails a full preliminary analysis of admissibility and competence requirements concerning a given petition, in the terms spelled out in the American Convention on Human Rights, the Commission's Statute and Rules of Procedure, and other applicable inter-American instruments.