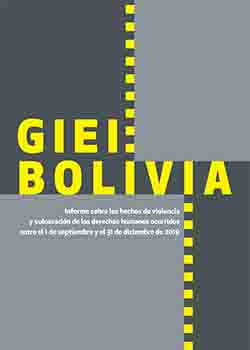 Washington, D.C. / La Paz – The Inter-American Commission on Human Rights (IACHR) attended, as a guest, the ceremony where the Interdisciplinary Group of Independent Experts formally submitted its report to the Plurinational State of Bolivia. IACHR President Antonia Urrejola, Second Vice President Flávia Piovesan (the IACHR's Rapporteur for Bolivia), and María Claudia Pulido, Assistant Executive Secretary for Monitoring, Promotion and Technical Cooperation on Human Rights of the IACHR, all attended the event remotely. The Commission's First Vice President Julissa Mantilla and Executive Secretary Tania Reneaum both attended the event in person.

The ceremony was further attended by the Bolivian President, who symbolically received the report of the Interdisciplinary Group of Independent Experts representing the State. Bolivia's vice president, the speakers of both houses of the country's Congress, and the ministers of Foreign Affairs and Justice and Institutional Transparency also attended the event, as did several ambassadors, legislators, and other authorities. Representatives of associations for victims—the central pillar for the Inter-American Commission's mandate—were also in attendance.

The IACHR stresses that submission of the report drafted by the Interdisciplinary Group of Independent Experts on Bolivia is the highlight of this work marked by technical skill, integrity, and impartiality. The Group was fully autonomous with respect to both the Commission and the Bolivian State, in compliance with the provisos of the Agreement signed by the IACHR and the Plurinational State of Bolivia on December 12, 2019, and with the relevant protocol drafted on November 23, 2020.

During the ceremony, the IACHR noted that the creation of the Interdisciplinary Group of Independent Experts followed a recommendation issued by the Commission in the wake of the observation visit conducted on November 22-25, 2019, in the context of Bolivia's political and social crisis. The Commission further noted that, as per its mandate, the Interdisciplinary Group of Independent Experts sought to assist investigations of the violence and human rights violations that took place in Bolivia over the period September 1–December 31, 2019, as agreed by the IACHR and the Bolivian State.

In her address, President Urrejola highlighted the IACHR's efforts concerning Bolivia and the role played by victims and by Bolivian civil society. "By attending this event, the Inter-American Commission stresses its profound commitment to the promotion and protection of human rights in Bolivia and to the fight against impunity. This commitment has also been apparent in the close, constant, and collaborative cooperation we have with the State, with victims, and with Bolivia's active civil society, in its full diversity and plurality," Urrejola said.

Commissioner Piovesan, IACHR Rapporteur for Bolivia, stressed the commitment of members of the Interdisciplinary Group of Independent Experts, who carried out their tasks over a challenging period marked by the COVID-19 pandemic. Commissioner Piovesan noted that, despite the challenges, the Group managed to draft a final report with recommendations that will help to promote the rights to truth and justice and the provision of comprehensive reparations for victims and their families.

Commissioner Mantilla said the Commission was grateful for the trust shown by the Bolivian State and by all the people who gave their testimony to the Interdisciplinary Group of Independent Experts and showed their trust in the mechanisms of the Inter-American Human Rights System.

The Commission stressed that autonomous and independent international investigation mechanisms have contributed to efforts to enforce the rights to truth and justice concerning serious violence and human rights violations in other Latin American States. The effectiveness of these mechanisms is particularly evident when States show their willingness and disposition to provide the conditions necessary for international experts to do their work.

The Commission stresses the Plurinational State of Bolivia's willingness to accept the creation of the Interdisciplinary Group of Independent Experts and to offer experts (and their technical team) the conditions they needed to conduct their tasks in a safe environment, without interference. These conditions included full access to the records of all criminal investigations and cases opened in this context, to public government reports on these events, and to all facilities, infrastructure, resources, and means necessary.

The IACHR stresses its certainty that this report will contribute to building and consolidating justice, truth, and reparations for victims, based on the applicable inter-American standards. The IACHR stresses that it will continue to promote and defend human rights in Bolivia, using all the tools available to ensure compliance with its statutory and conventional mandate and focusing on monitoring and other tools to oversee compliance with international recommendations. These efforts seek to keep the focus on victims and their families, who continue to inspire—as they have done over six decades—the autonomous work done by the Inter-American Commission on Human Rights.