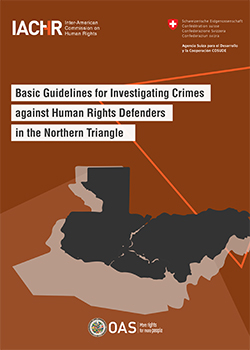 Washington, D.C. — Today, the Inter-American Commission on Human Rights (IACHR) published its Basic Guidelines for Investigating Crimes against Human Rights Defenders in the Northern Triangle. The document's main objective is to raise awareness around standards and guidelines that derive from precedents and recommendations issued by the IACHR in its case, thematic, or country reports; resolutions from its precautionary measure mechanism; and the jurisprudence of the Inter-American Court of Human Rights (IA Court) regarding investigations of crimes against human rights defenders, within the broad framework of the principles of international human rights law.

The IACHR has noted with concern the risks faced by human rights defenders in the countries of northern Central America as they go about their work, which range from stigmatizing statements, harassment, and criminalization to direct attacks on their lives and personal integrity. These risks demonstrate the ongoing challenges to being able to exercise the right to defend human rights in Guatemala, Honduras, and El Salvador effectively, freely, and without being subjected to intimidation. The impunity around crimes against human rights defenders in these countries is particularly striking.

Through this new report, the IACHR seeks to help the States of northern Central America to strengthen or implement a comprehensive protection system of human rights defenders that is rooted in a recognition of how important the defense of human rights is for society. Likewise, States should avoid criminalizing these individuals' activities and should adopt the main standards for investigating crimes against human rights defenders, as this is the most effective means for protecting them.

In this sense, the report addresses the duty to investigate such crimes from two perspectives. The first concerns the duty to investigate, clarify, prosecute, and punish crimes that are committed against human rights defenders. The document underlines the need for jurisdictional authorities to take a differentiated gender, ethnic-racial, and intersectional approach when investigating, prosecuting, sanctioning, and providing reparation for these crimes. The second perspective concerns the obligation to prevent and respond to the criminalization of human rights defenders. In each section, the IACHR presents a series of guidelines to be observed by States.

The IACHR has already highlighted the fundamental role that human rights defenders play in consolidating democracy in the countries of northern Central America. It does hope that these new guidelines will help various institutions within these States to assimilate and adopt the main inter-American standards on this matter, so as to improve their investigation systems and further the fight against impunity as a guarantee of nonrepetition that ensures increased protection for human rights defenders.