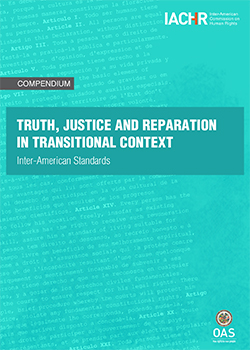 Washington, D.C. — The Inter-American Commission on Human Rights (IACHR) has launched a new publication, the "Compendium on Truth, Memory, Justice, and Reparation in Transitional Contexts". The compendium is a systematization of the standards developed during the IACHR's monitoring work and the decisions it has reached on cases regarding the rights to truth, justice, and reparation for gross human rights violations during transitions from dictatorships to democratic rule and during peacebuilding and peace consolidation. The document also addresses memory and guarantees of nonrepetition as fundamental pillars for strengthening the rule of law and a culture of human rights in the Americas.

Historically, the IACHR has emphatically informed and reminded States of the intrinsic relationship between truth, justice, reparation, and guarantees of nonrepetition, and the way in which these aspects of the transitional process are not interchangeable but rather complement and feed into each other. Through its different mechanisms, the IACHR has determined the content and scope of States' international obligations in contexts of gross human rights violations and has formulated a series of recommendations to make States' responses to these situations more effective. The measures that the IACHR has recommended include adapting domestic regulations and developing policies and practices of recognition and redress and guarantees of nonrepetition of past violations, as well as institutional strengthening to ensure that truth, justice, and reparation systems are capable of responding appropriately.

This compendium brings together central aspects of the extensive work that the IACHR has undertaken in the process of implementing these analyses and drafting these recommendations. The publication was created by the IACHR as a tool for cooperation, promotion, and technical assistance with the goal of promoting greater knowledge and use of inter-American human rights standards on transitional justice. To achieve this, the document is divided into three sections. The first addresses the multiple standards developed in the area of justice, the second concerns truth and memory, and the third looks at reparation. As guarantees of nonrepetition are intrinsically linked to the above three areas, they are analyzed in a crosscutting manner.