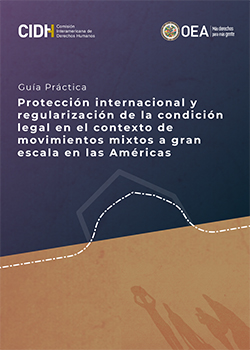 Washington, D.C. — The Inter-American Commission on Human Rights (IACHR) and UNHCR, the UN Refugee Agency, presented their Practical Guide to Improve International Protection and the Regularization of Legal Status in the Context of Large-Scale Mixed Migration Movements in the Americas. It forms part of the series of guides published by the IACHR to provide countries in the region with support in the form of a toll for implementing inter-American human rights standards and principles.

The publication is one of the strategies for addressing the situations experienced by people in movement during and after the COVID-19 pandemic. It also seeks to consolidate the regional regulatory framework and publicize good practices that States have implemented in response to the protection-related needs of people who are part of the current mixed migration movements in the region (migrants, refugees, stateless people or beneficiaries of complementary protection). It approaches this issue by taking into consideration the continuous increase in the number of people moving through the Americas, based on the understanding that States need to take a comprehensive approach to the difficulties faced by people in human movement. The IACHR hopes that this publication will be useful to those responsible for applying the principles and recommendations concerning the protection of people in movement that have been developed through the practices of States and international organizations.

The guide is divided into four sections. The first describes the context of human movement in the Americas. The second addresses the regulatory framework for the protection of people in movement, and the specific regimes for protecting these groups, based on international obligations deriving from international law. The third section discusses good practices around regularization and the procedures for determining refugee status and statelessness. In the final section, the IACHR makes recommendations to States based on inter-American and international standards, in accordance with the power granted to it by Article 41.b of the American Convention on Human Rights.

UNHCR, the UN Refugee Agency, is a global organization dedicated to protecting the rights of refugees and those forcibly displaced by conflict or persecution and promoting lasting solutions to their predicament. Its headquarters are in Geneva, Switzerland, and it has more than 18,800 employees in more than 130 countries, approximately 91% of whom are working in the field. UNHCR received the Nobel Peace Prize in recognition of its work in 1954 and 1981, and was awarded the Prince of Asturias Award in 1991.