Human Rights Day: IACHR Pays Tribute to Victims of Human Rights Violations and to Millions of People Who Have Died of COVID-19 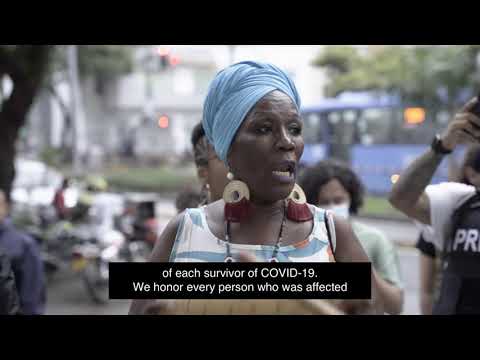 Washington, D.C. – International Human Rights Day is held every December 10, in remembrance of the adoption of the Universal Declaration of Human Rights in 1948. Today, the Inter-American Commission on Human Rights (IACHR) pays tribute to all persons who are victims of human rights violations and to more than 2 million people who have died of COVID-19 in the Americas, as well as to their families. The Commission stresses its commitment to promoting and defending human rights in the region, with international solidarity, non-discrimination, and equality of opportunity. And it reminds States of the importance of stepping up their efforts at the levels of legislation, administrative matters, and public policies, in order to protect all rights for all residents of the Americas.

The IACHR reminds States in the region of their obligation to protect the human rights of all people who live in or move through their countries. The year 2021 has still been marked by the COVID-19 pandemic. The pandemic has increased inequality in the Americas, already the world's most unequal region before this health emergency. It poses even greater challenges to States in their efforts to ensure a dignified life for all people, considering factors like violence—especially violence based on gender and race criteria—and persistent corruption and impunity. People's historical demands were also apparent in their exercise of the right to social protest in repressive contexts. Migration, forced internal displacement, and the number of refugees and stateless persons have increased, as has structural discrimination against vulnerable groups.

Through various mechanisms and monitoring instruments and through dialogue with States and with civil society, the Commission identified in 2021 a series of challenges faced by the Americas which need to be urgently addressed. These challenges include the following: journalists and human rights defenders are still victims of attacks; harassment, murder, and intimidation in various countries; violence persists against women and girls; individuals in human mobility contexts face various threats that endanger their rights and their lives; individuals who are deprived of liberty—who have suffered the impact of the pandemic—live in overcrowded detention facilities, and there is an excessive use of pretrial detention.

Historically vulnerable individuals, including older persons, persons with disabilities, Afro-descendant persons, lesbians, gays, bisexuals, trans, and intersex persons, and children and adolescents are exposed to poverty conditions, and to a lack of access to rights including education, employment, and health. Indigenous peoples are being denied their land and territory or are being victims of attacks in their communities.

Democratic institutions and the rule of law in some countries in the Americas have been gradually weakened through administrative and judicial decisions that violate the separation of powers, and through repressive trends against defenders and, sometimes, against demonstrators in social protests. Violence against journalists involves an attack on freedom of expression.

The regional scenario exposes the major challenges facing States and societies in the Americas who need to transform general and specific situations, provide reparations for victims of human rights violations, end all forms of gender-based discrimination and violence, and generally ensure that all people in the Americas can live dignified lives. International and regional human rights standards around the American Declaration of the Rights and Duties of Man and the American Convention on Human Rights are instruments that can help to usher in the changes that are required in public policy, legislation, and other fields. A year that remains marked by the pandemic requires international solidarity that ensures measures aimed at social and economic reconstruction, as noted in resolutions 1/20 and 1/21 (respectively addressing the pandemic in general and vaccines in particular).

Human rights are the foundations that are inherent to human dignity, and therefore to a dignified life. Today, the IACHR stresses its commitment to further promoting and defending the dignity and rights of all people in the Americas.